Nitrogenase to be a two-trick pony

An enzyme whose job is to convert nitrogen gas to ammonia - a process known as nitrogen fixation - can also reduce carbon monoxide US researchers have discovered.

Nitrogen fixation requires highly specialised catalytic machinery, and the fact that the same system can also act on an entirely unrelated molecule is intriguing. Given that the reduction of both nitrogen and carbon monoxide - in this case producing ethylene, ethane and propane - are industrially important processes, the discovery could have potential commercial applications in the future. 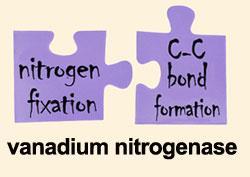 The team for the first time isolated sufficient quantities of purified vanadium nitrogenase to subject it to comprehensive tests. One of these involved exposing the enzyme to carbon monoxide - a potent inhibitor of nitrogen fixation in the molybdenum version of the enzyme. They discovered by chance that in a total atmosphere of carbon monoxide, with no nitrogen present, the enzyme produced measurable quantities of ethylene (C2H4), ethane (C2H6) and propane (C3H8).

’The fact that this system can take carbon monoxide and make new carbon-carbon bonds was very surprising and very interesting,’ says Ribbe. ’These are industrially important products and it is possible that with some engineering we could maybe extract the active centres and find ways of producing longer carbon chains. Precisely how the chemistry works in the system is far from clear, and we are now focusing on how to figure this out.’

Jonas Peter, an expert in organometallic chemistry from the California Institute of Technology, US, describes the discovery as ’fresh and exciting.’ Peters adds, ’The organometallic community will no doubt have great fun speculating about the types of organometallic intermediates that can be invoked to account for the range of reduction products observed. To those with a specific interest in how low-coordinate iron might be able to activate and catalyse the reduction of small molecule substrates like N2 and CO, this discovery is just what the doctor ordered.’