Scientists in the US have developed a new family of aerogels that preferentially soak up heavy metals from contaminated solutions. The team, led by Santanu Bag at Northwestern University, Illinois, created their "chalcogels" by using sulfur or selenium in place of oxygen, making the porous aerogel structure more preferential to binding with toxic metals like mercury.

Aerogels are typically made from silicon oxide or aluminium oxide gels which are supercritically dried using carbon dioxide. This process essentially replaces all the solvent molecules with air (hence aerogel), but keeps the gel network intact. Because of their extremely high surface area and low density, aerogels have found hundreds of applications in recent years, ranging from molecular sieves to collecting dust from the tails of comets.

But making aerogels without using oxides has long proved difficult. Professor Mercouri Kanatzidis, who worked on the project, told Chemistry World: "We wanted to use chalcogenide [sulfur or selenium containing] clusters but trying to form gels without using oxides often just gave us a precipitate instead.  The secret was to use platinum to stabilise the structure, as well as slowing down the reaction to the point where the complex could form a network inside the liquid - giving rise to a gel." 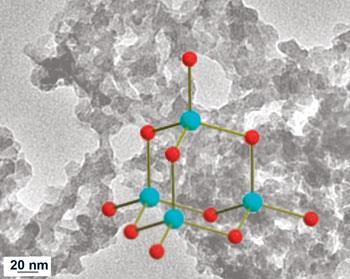 The team then dried their new "chalcogels" and put them to the test. The chalcogels preferentially extracted heavy metals from solutions contaminated with a variety of metals, removing 99.9 per cent of the mercury but only 40 per cent of the zinc. This remarkable absorbing power could find many applications, such as purifying water resources or extracting residual levels of heavy metals from products synthesised using heavy metal catalysts.   For the moment however, these gels are likely to be too expensive for most practical applications.

The chalcogels were shown to have another interesting property. Dr Stephanie Brock from Wayne State University, Detroit explains: "Most oxide-based aerogels have a very wide band gap, meaning that they can only absorb light from the UV region. However these chalcogels have a smaller band gap which allows them to absorb light from the visible and IR regions too - making them potentially useful for applications such as photocatalysis.

Brock also thinks that we may see practical applications of these gels sooner than you think: "Although these gels are expensive at the moment, this research is fundamental in understanding the important parameters involved. We should be seeing more economical designs in the future."