Offsetting the cost of a green solvent

UK scientists have conducted a study to show how waste carbon dioxide can become an exploitable resource. The work could kick idle supercritical processing plants back into life.

High pressure supercritical carbon dioxide (scCO2) can be an effective solvent for a range of catalytic reactions, but the cost of compressing CO2 is high. Martyn Poliakoff, Mike George and Trevor Drage have been collaborating at the University of Nottingham to assess the possibility of using scCO2 from carbon capture and storage (CCS) - in which considerable quantities of pressurised liquid CO2 will be available - in the hope of turning a waste product into a resource.

It is hoped that CCS will achieve large reductions in CO2 emissions from power plants, but as the cost of compression is incurred at the plant, using this captured CO2 as a source of scCO2 for chemistry would be a cheaper and greener route. ’The first scCO2 chemical plant used less than 0.5 ton of scCO2 per hour, but a power station running at full blast produces more than 0.5 ton of CO2 per second, so you could produce enough high pressure CO2 during a football match to run the plant for a year without needing to recycle the CO2,’ says Poliakoff. 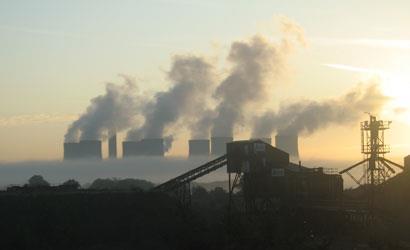 However, one of the concerns is that captured CO2 will contain impurities. So, the team investigated what effects these impurities might have on a reaction that has previously been carried out commercially in scCO2 - the hydrogenation of isophorone to trimethylcyclohexanone catalysed by Pd on SiO2/Al2O3. They used an automated continuous reactor and monitored the products using gas liquid chromatography. They found that none of the impurities caused problems that couldn’t be overcome.

’I’m delighted to see some encouraging science that may bring supercritical processing back towards commercial reality,’ says Harry Swan, managing director of Thomas Swan & Co. Ltd, who built the world’s only continuous phase scCO2 reactor in 2002. But, owing to economic challenges and lack of legislation to reduce the use of volatile organic solvents, which would have created demand for scCO2 as an environmentally friendly alternative, the plant is sitting idle. ’This work brings us a step closer to my long term objective of getting our plant back up and running,’ he adds.

’The obvious next step is to try other reactions,’ says Poliakoff. ’Although hydrogenations are interesting reactions, it may well be that the real future of CO2 lies in oxidation reactions that are dangerous in conventional solvents’.