Organocatalysis to convert newspaper and cotton into a fossil fuel alternative

Viable alternatives to fossil fuels are a vital area of research for chemists as current deposits dwindle. To combat our reliance on these fuels, US scientists have discovered a new route for turning the carbohydrate cellulose – the most abundant organic molecule on Earth – into 5-(hydroxymethyl)furfural (HMF), a promising precursor molecule to alternative fuels.

Whereas conventional methods for converting carbohydrates into HMF have involved the use of harsh reaction conditions and toxic heavy metal catalysts, the route proposed by Ronald Raines and co-workers at the University of Wisconsin-Madison uses a one-pot, low temperature approach that utilises less toxic organocatalysts instead.

Converting cellulose to HMF is a three-step process. It consists of hydrolysis of cellulose to glucose, isomerisation of glucose to fructose and dehydration of fructose to HMF. The hardest step is the transformation from glucose to fructose and it is difficult to achieve this without using a catalyst. So, the team used a phenylboronic acid organocatalyst combined with magnesium chloride and mineral acids to get HMF in yields of up to 54%, a yield comparable to using toxic heavy metal catalysts. Phenylboronic acids have some catalytic activity, but the magnesium chloride and mineral acids are needed to boost the efficiency of the conversion process.

Although the boronate loadings need to be high for rapid conversion, the catalysts can be recovered by adding water. This allows the boronic acid and magnesium chloride to be extracted while maintaining their catalytic activity.

To test the method further, the team used cotton, paper towels and newspaper as sources of cellulose. They obtained HMF yields ranging from 18–40%, depending on the purity of the cellulose. ‘Although the yields were a little lower,’ says Raines, ‘the fact that it worked was really gratifying.’ This method could be used to recycle everyday rubbish as biomass for biofuels and other chemicals. 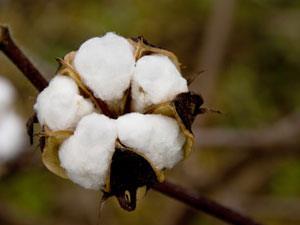 Cotton was used as a source of cellulose

‘Previous work reported this reaction using toxic chromium salts, but this work involves the substitution of the metal salts to less toxic organocatalysts,’ says Atsushi Fukuoka, who is a director at the catalysis research centre at Hokkaido University, Japan.

In the future, Raines hopes to improve on the catalyst. ‘We are working on different strategies, for example immobilisation of the catalyst, which allows for high loading and recoverability but is not possible with chromium ions,’ he says.