Solar cells based on organic semiconductors instead of silicon could potentially turn wall paints into a source of electricity, but their low efficiency is a major roadblock. Scientists in Bangalore, India, now believe they have a new approach to boosting the output from polymer cells. 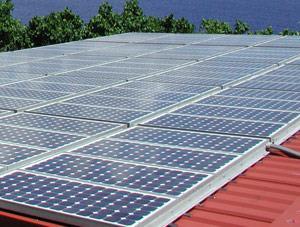 Conventional solar cells are made from a sandwich of two silicon-based materials, each containing traces of other atoms to increase or decrease the number of available electrons. This difference between relatively negative or positive materials sets up an electric field at the junction between n- and p-type semiconductors. Adding a photon of light can then bounce electrons from one side to the other, creating a current.

Organic semiconductors do not have the same ordered structure as crystalline silicon, but they can be mixed to form billions of such interfaces, where every contact point between two polymer molecules forms a junction. Power conversion efficiencies of 1.7 per cent have been reached1 using poly [2-methoxy-5-(2-ethylhexyloxy)-1, 4-phenylenevinylene] (MEHPPV) as an electron donor, and cyano-PPV (CNPPV) as acceptor.

Adding a third polymer to this system allows the device to make the most of the full spectrum of colours in visible light, according to scientists at the Jawaharlal Nehru Centre for Advanced Scientific Research (JNCASR) and the Indian Institute of Science in Bangalore.2

The team has used two types of donor MEHPPV molecules with different electrical properties, determined by the arrangement of their carbon-carbon double bonds, along with the normal CNPPV acceptor. The three polymers separate into different regions within the device, forming a gradient that allows efficient energy transfer to take place, explains Dhritiman Gupta, a graduate student at JNCASR and principal author of the study.

The gradient means that the first MEHPPV polymer absorbs blue light, with the second picking up other colours, generating a cascade of electrons flowing to the acceptor polymer.

The team found that light with a wavelength of 530 nanometres was converted to electricity with an efficiency of one per cent. That’s not spectacular, admits K.S. Narayanan, who leads the research team, but it’s enough to prove that the method can harvest a wide range of colours of light, including blue light which is generally less efficient at producing a current.

The group now hopes to encapsulate both forms of MEHPPV into a single polymer: preliminary studies have revealed that this could enhance the current by four times. ’We are going to explore this and other ideas to improve the efficiency to more than 5%,’ says Narayan.