Twisted polymer springs capable of turning light energy into mechanical movement have been developed by researchers from the Netherlands and the UK. The coils work by translating molecular movement into macroscopic motion and could one day form the basis for soft robots.

While many molecules have the potential for mechanically relevant movements, such as walking, twisting and rotating, scaling up these motions to the macroscopic scale has been difficult. Molecules must be laid out in such a way that their movements cooperate to amplify motion, something that the random Brownian motion of a solution makes difficult. Nature, however, uses molecular-scale machines as the basis for a wide variety of biological processes. Helical motions underpins many of these, including tendril coiling, seed pod opening and the springs found in some single-celled organisms.

Using these as inspiration, the researchers set out to create their own functional helical materials. To do this, they used a liquid-crystal polymer network, which can form both left and right-handed helices, and added an azobenzene molecular switch, which changes shape when exposed to ultraviolet light.

The resulting liquid crystal mixture was polymerised and dried in a glass cell, creating a twisted geometry – with the molecular organisation at the top surface forming at right angles to that at the bottom. In turn, this geometry causes each face to shrink at right angles to the other, so that when the film is cut into strips, coiling occurs – with the extent and handedness of the spirals dependant on the orientation of the molecules relative to that of the ribbon’s axes. 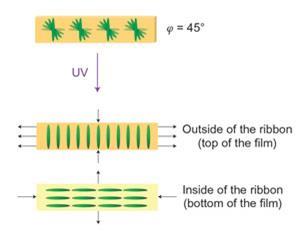 When exposed to ultraviolet light, the azobenzene switches increase disorder in the ribbon’s molecular structure causing the springs to coil, uncoil, or even reverse coiling direction to accommodate the distortion. From this, the team were able to create a simple machine, formed from one long ribbon with different-handed coiling at each end. When irradiated, each end of the ribbon coiled or uncoiled respectively, moving the central kink between them back and forth in a piston-like motion. By placing a magnet in this kink, the researchers were able to use the ribbon to drive another magnet held nearby.

‘These materials are soft actuators and might one day become building blocks for soft robots,’ says paper author Stephen Fletcher, a chemist at the University of Oxford. Such machines would be able to manipulate soft or delicate objects – such as organs – in ways not possible with conventional, hard robotics. ‘Think about the tentacles of squids, the trunks of elephants, the tongues of lizards and mammals,’ he explains. ‘These soft actuators perform movements whose mode of movement are highly complex and could not be achieved by conventional actuation systems.’

Richard Jones, a polymer physicist at the University of Sheffield, notes that the fundamental idea of coupling polymer phase transitions with light-driven azobenzene transformations is not new, ‘but doing it in a chiral liquid crystal network adds an interesting new dimension’.