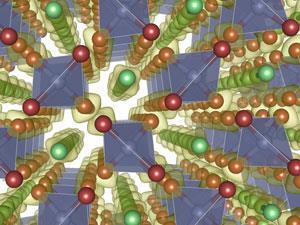 At high pressures, nitrogen abandons its familiar diatomic form to adopt a variety of weird structures. Many of these phases have been predicted and some observed experimentally. Now researchers have used computer algorithms to calculate nitrogen structures at pressures far beyond the reach of current experimental determinations. Most notably, they calculated that it could form an ionic salt in which both the cations and anions were nitrogen.

Atmospheric nitrogen is so unreactive because the triple bond requires huge amounts of energy to break. This triple bond breaks much more easily at high pressures, however, and once it is broken nitrogen forms a variety of structures. In 1992, Christian Mailhiot and colleagues at Lawrence Livermore National Laboratory predicted that nitrogen atoms could polymerise into a diamond-like configuration above about 110GPa.1This was confirmed experimentally in 2004 by Mikhail Eremets and colleagues at the Max Planck Institute in Mainz, Germany.2

Numerous possible structures have subsequently been proposed for nitrogen at even higher pressures. To determine which of these would actually occur, theoretical chemists and condensed matter physicists used computational algorithms based on density functional theory. They randomly searched through multiple possible electronic structures and found the lowest energy, and hence most stable, states at terapascal pressures.3

Above 2.1TPa a wide variety of exotic metallic and even, at very high pressures, superconducting phases start to appear. Between 2.5 and 7.1TPa, the most stable phase comprises well separated N2 dimers embedded within a matrix of N5 tetrahedra. The researchers used two independent mathematical algorithms to calculate the distribution of charge within this structure. Both indicated that electrons would be drawn towards the tetrahedra. This ‘charge disproportionation’ would effectively create an ionic salt in which both the cation and the anion consisted of the same element. 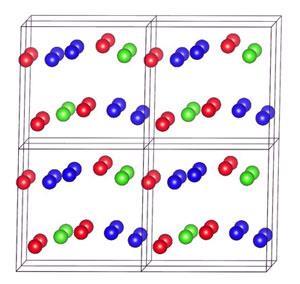 At intense pressures between 7.1TPa and 11.5TPa, nitrogen is predicted to arrange itself in undulating waves

At still higher pressures, other exotic structures are predicted. Between 7.1TPa and 11.5TPa, the lowest energy phase is a complex structure with the atoms arranged in undulating waves. This too shows quite large charge disproportion within its complex, 48-atom unit cell. Above about 11.5TPa, the atoms rearrange themselves again into an octahedral arrangement that should superconduct, and then above 30TPa into a trigonal dodecahedron structure.

Team member Chris Pickard, an electronic structure theorist at University College London, says the predictions should be reliable, as at higher pressures the simulations mimic real life more closely. He adds that although terapascal pressures cannot be reached in the static compression experiments used in the lab, the very limited data emerging from shockwave compression techniques, which produce terapascal pressures for nanoseconds, may be enough to test whether models are consistent with reality.

Eremets says that, as an experimentalist, he is inclined to trust the theorists' calculations because ‘we have a good experience with predictions’. He lists a number of cases in which high pressure predictions, when tested, turned out to be correct.

The current research says nothing about the physical properties of any of the nitrogen structures outlined, such as the colour, hardness or electrical or thermal conductivity, but Pickard says that this could now be calculated. ‘There are many groups that do first principles prediction of these kinds of properties at very high pressures,’ he says, ‘but you need to have the model of where the atoms are to start with. That's what this work does.’

Artem Oganov at the computational materials discovery laboratory at Stonybrook University, US, who led the team that made the first prediction of charge disproportionation at high pressures in elemental boron4 – a prediction they later verified experimentally – is sceptical of the idea that these exotic structures might be found on huge planets like Jupiter where pressures reach into the terapascal range. ‘Nitrogen is quite abundant in the universe – we have planets such as Uranus and Neptune which contain a significant proportion of nitrogen,’ he says. ‘But this nitrogen is in the form of compounds, mostly with hydrogen. Therefore, findings in pure nitrogen do not really apply.’

Nevertheless, he believes that there are important implications for fundamental chemistry here. ‘It would be useful to understand why charge disproportionation is happening,’ he says, ‘as the existing rules of chemistry seem to be pretty helpless in explaining this high pressure phenomenon. New rules which will be more powerful than what we have now have to be developed and papers like this provide factual material for testing those new rules when they appear.’