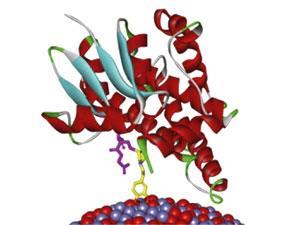 Iron oxide nanoparticles coated with glutathione (purple), which is anchored by dopamine (yellow) and binds to the protein

US scientists have used magnetic nanoparticles with specific ligands to latch on to and visualise specific proteins in living cells. The approach could be used to identify new, selective ligands that bind proteins, which may help uncover drug–target interactions inside cells, say the researchers. Also, using magnetic nanoparticles means that the distribution, orientation and aggregation of cellular proteins could be controlled, leading to new ways to control the fate of cells.

A deeper understanding of protein function inside cells is essential as scientists try to find new ways to diagnose and treat disease. The first challenge is to locate the proteins involved and find out what they are doing, which is not an easy feat, considering the abundance of different proteins in our cells.

To overcome this hurdle, Bing Xu and his team at Brandeis University have designed a nanoparticle complex that can best be thought of as a magnetic docking station for specific proteins. The team coated iron oxide nanoparticles with either glutathione or trimethoprim ligands which bind to the protein of interest. In this case, the protein of interest was green fluorescent protein (GFP, a protein that glows green when exposed to certain light wavelengths). Since several GFP proteins can dock at any one time onto the nanoparticle, the proteins cluster together producing GFP’s characteristic fluorescent signal, which the team observed using a confocal fluorescence microscope.

Vasudevan Biju, an expert in using nanostructures for bioimaging purposes from the National Institute for Advanced Industrial Science and Technology, Japan, comments: ‘[Xu’s] report on the sorting of intracellular fusion proteins using iron oxide nanoparticles is the stepping stone for not only sorting proteins but also understanding structural and functional disorders at molecular levels using magnetic resonance imaging.’

Protein targeting in this way is a first for magnetic nanoparticles but the real potential is yet to come, according to Xu’s team. Introducing an external magnetic stimulus to manipulate the nanoparticles opens a way to study other phenomena, for example how magnetic forces interact with some organisms such as magnetobacteria, says Xu. ‘Also, [the technique could be used to study] the GPS system used by birds, if birds use the Earth’s magnetic field for position and guidance of flight,’ he adds.