Pterins, sex and the single butterfly 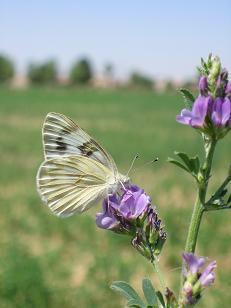 The amazing colours of butterflies are not there simply for the delight of lepidopterists, report researchers in the US and UK who have characterised the molecular composition and optical properties of pigmented nanoscopic granules found in the tiny wing scales of the pierid butterfly, Pontia protodice.

Not only do these granules contain UV absorbing pterins, but the structural arrangement and density of granules in each wing scale combine to affect just how much light is reflected. Male pierids have more granules per scale than females, so when it comes to mating, the females could simply be dazzled by the light reflected from males’ wings.

Absorbing strongly in the UV, which humans cannot see, the pigments produce a ’blaze’ of colour to the compound eyes of pierid butterflies.

Using confocal- and scanning electron microscopy, Nathan Morehouse at Arizona State University and colleagues studied the nanoscopic structure of granules and their pterin content in the individual wing scales of male and female pierid butterflies. Shaped like oblongs, the granules contain pterin molecules, with granules being more numerous and densely packed in male wings than in females. The granules affect the amount of light each scale reflects, so that the wings of males reflect more light than females. Removing the pterins and the granules significantly reduces the amount of light reflected from single scales.

’This is a unique case where collections of pigment molecules have been observed to absorb one range of light wavelengths while simultaneously augmenting the reflection of another,’ said Morehouse. ’It occurs through subtle nano-scale ordering of pigment-filled granules.’ This combination of pterin absorption and reflection appears to be important for males seeking to impress females, he added.

Morehouse speculates that similar use of colour absorption and reflection occurs in other species and could be used to enhance competitive advantage in the constant battle for sexual partners.