Putting the brakes on nanomachines

Chemists in Taiwan have developed a nanomachine fitted with light-triggered molecular brakes, which can stop nanoscale propellers or wheels from spinning.

The ’nanobrake’ is applied by a specific wavelength of light - and then released using a different wavelength. Although other forms of molecular brake have been designed, this is the first time that light has been used as a remote trigger.

’Using light allows our machinery to be clean, fast, and remotely-accessible,’ says Jye-Shane Yang, the leader of the research team at National Taiwan University. ’Our brake also has unprecedented stopping power - we have shown that it is capable of reducing rates of rotation by one billion times.’ 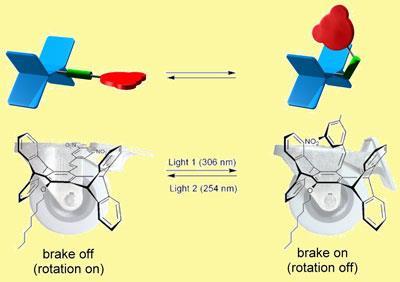 The nanobrake is applied and released by specific wavelengths of light

The team demonstrated the potential for their nanobrake - a bulky 3,5-dinitrophenyl group attached to a carbon-carbon double bond - by attaching it to a freely-rotating four-bladed pentiptycene molecule. Light can trigger the double bond to photo-isomerise, switching between cis and trans. When double bond is in the trans configuration the pentiptycene propeller can spin freely; but when switched to the cis isomer the bulky phenyl group prevents effective rotation.

Yang envisages that nanobrakes like this could be fitting onto many spinning or rotating nano-scale systems - such as in controlling the movement of "nanocars" or designing extremely sensitive accelerometers to detect motion.

’This is an interesting solution-based method to stop rotation by inserting steric hindrance,’ says James Tour at  Rice University in Houston, Texas. Tour designed the original nanocar back in 2006 - an H-shaped carbon chassis with four fullerene buckyball wheels.

’But the real challenges are still ahead,’ Tour continues. ’This technology first needs to be mounted on a surface and then used to perform useful work - for example to trigger a lever or switch that can affect a macroscopic system.’