Q and A: The hunt for water on Mars

The Red Planet is supposed to be swimming with water - so where is it all?

The Phoenix Lander has been digging for water on Mars since late May 2008. Yet despite the best efforts of the NASA scientists at the controls, the solar-powered robot has hit nothing but ice. The most recent results from the Phoenix’s electrical conductivity probe were expected to show the presence of liquid water, but it hasn’t materialised. Chemistry World  finds out why.

Is there definitely water on Mars?

Without a doubt. The Phoenix dug up water ice in July, just five centimetres below the surface, and water vapour has been detected in the Martian atmosphere. What hasn’t been found yet is liquid water, which is essential for transport processes and protein function within cells and would therefore make life on Mars a possibility. David Catling, a science team member for the Phoenix mission based at the University of Bristol, says he’s sure it exists. ’If you go down deep beneath the surface - as on Earth when you go down in a mineshaft - it gets warm. And so on Mars, eventually it will reach a temperature where all year round, regardless of the temperature at the surface, there should be liquid water.’ 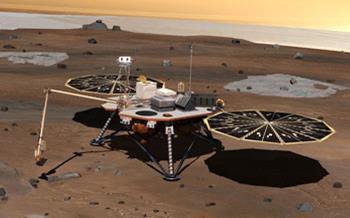 Will Phoenix find water before the Martian winter closes in?

What about surface water? Haven’t we seen it from orbiting spacecraft?

Not exactly. NASA’s Global Surveyor spacecraft, launched in 1996, spotted what looked like ancient frozen soils and gullies, as well as signs of recent water flows. But even if there is liquid water, Phoenix might be looking in the wrong place. It’s currently roving around in the Martian equivalent of the Arctic Circle, where Catling says it would be unlikely to come across puddles of water. It should be possible, however, to find very thin films of unfrozen water clinging to soil grains. ’But that doesn’t necessarily imply that it could be taken up by cells,’ says Jorge Vago, Project Scientist for the European Space Agency’s ExoMars exploration mission.

So what have we found out from the Phoenix mission?

’Before Phoenix, we knew there was water on Mars, but we didn’t know how deep it was,’ says Catling. ’So because we’ve found ice just below the surface, we know that if people were going to go to Mars, they could get water ice without digging down very far.’ Phoenix’s built-in wet chemistry lab, which mixes Martian soil with Earth water to analyse the soluble components, has also shown that the soil contains salts that dissolve to produce sodium, magnesium, chloride, calcium and perchlorate ions. As brines can remain liquid well below zero, scientists think they may be able to find salty films even under Mars’ hostile conditions.

Then there is a chance that we could still find liquid water?

One of the main problems now facing the Phoenix is that the Martian summer is drawing to a close, meaning ever-decreasing amounts of sunlight for its solar panels. But by sticking its conductivity probe further into the soil, or elsewhere on the surface, scientists could still detect water - readings would show high electrical conductivity. The Phoenix also houses eight tiny ovens - each just a few millimetres across on the inside - four of which have yet to be filled with soil. If water was present in one of the four final samples, it would be driven off as steam. And, according to Vago, it’s still possible that NASA is holding back the crucial data. ’When scientists find something they think is cool they like to check it a thousand times, so you never know,’ he says.