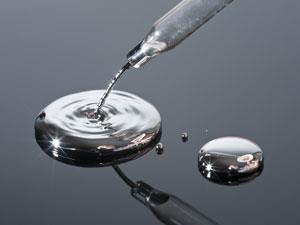 The effects of relativity can be seen in everyday phenomena

Why is mercury a liquid at room temperature? If you ask that question in a school classroom you will probably be told that relativity affects the orbitals of heavy metals, contracting them and changing how they bond. However, the first evidence that this explanation is correct has only just been published.

An international team led by Peter Schwerdtfeger of Massey University Auckland in New Zealand used quantum mechanics to make calculations of the heat capacity of the metal either including or excluding relativistic effects. They showed that if they ignored relativity when making their calculations, the predicted melting point of mercury was 82°C. But if they included relativistic effects their answer closely matched the experimental value of -39°C.

Relativity states that objects get heavier the faster they move. In atoms, the velocity of the innermost electrons is related to the nuclear charge. The larger the nucleus gets the greater the electrostatic attraction and the faster the electrons have to move to avoid falling into it. So, as you go down the periodic table these 1s electrons get faster and faster, and therefore heavier, causing the radius of the atom to shrink. This stabilises some orbitals, which also have a relativistic nature of their own, while destabilising others. This interplay means that for heavy elements like mercury and gold, the outer electrons are stabilised. In mercury’s case, instead of forming bonds between neighbouring mercury atoms, the electrons stay associated with their own nuclei, and weaker interatomic forces such as van der Waals bonds hold the atoms together.

In the 1960s, Pekka Pyykkö, now at University of Helsinki, Finland, discovered that gold’s colour was the result of relativistic effects. He showed that the lower energy levels of the 6s orbital of gold means that the energy required to excite an electron from the 5d band lies in the visible rather than UV range of light. This means that gold absorbs blue light, while reflecting yellow and red light, and it is this that gives the metal its characteristic hue. If the energies of the two bands were calculated without including relativistic effects, the energy required is much greater. Further calculations have subsequently shown the influence of relativity on the colour and bond lengths of heavy metal compounds, as well as its importance in catalysis. However, the low melting point of mercury could still only be described as ‘probably’ due to relativistic effects.

‘At a hand-waving, speculative level, this idea [that relativity affects the melting point of mercury] has been around since the late 1970’s,’ explains Pyykkö, who was not involved in the work, ‘but this is the first quantitative proof.’

Schwerdtfeger’s team, in particular, have been working on the problem for couple of decades. The reason for the delay, he explains, was that until recently computers could not complete the powerful calculations the team performed. ‘A lot of computer time was required,’ he adds, ‘and the algorithms used are more efficient nowadays.’

But beyond making it into the textbooks, which this work will definitely do, Schwerdtfeger hopes that by showing that his approach works it can be used to calculate the melting points of other metallic systems.

But more importantly, next time a teacher gets asked about one of the most conspicuous examples of relativity, they’ll know there’s evidence to back up their explanation.