Molecular probes could shed light on mechanisms of disease 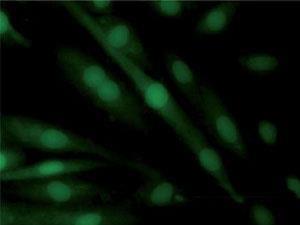 Fluorescence image of a polysulfide in H9c2 cells

Scientists in the US have made two fluorescent probes that can distinguish persulfides and polysulfides from hydrogen sulfide. This work paves the way for developing non-destructive probes for sulfane sulfurs that can be used in living cells and even in vivo.

Sulfane sulfurs – which feature divalent sulfur atoms bonded to other sulfur – appear in a number of biologically important compounds. They include thiocysteine and thiocystine, two products of cysteine metabolism which are found at higher than normal concentrations in cancer cells. Until now, the only selective methods for detecting sulfane sulfurs were destructive and could therefore not be used for real-time imaging. 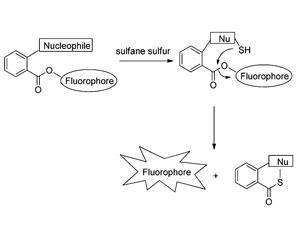 Now, Ming Xian and colleagues at Washington State University have designed a probe for sulfane sulfurs and tested it on living cells. The probes have a thiosalicylic acid core and will only react with sulfane sulfurs in a fast addition–cyclisation reaction to form benzodithiolone and release a fluorophore. Other reactive sulfur species such as hydrogen sulfide and thiols like cysteine cannot bind to the probes to initiate cyclisation. As well as being highly selective these probes show impressive sensitivity for sulfane sulfurs with a detection limit as low as 30nM.

Kate Carroll, of the Scripps Research Institute in California, US, who develops chemical tools to understand molecular mechanisms in cells, says ‘this is an exciting new addition to the field, which should enable the study of signalling in physiological and pathological settings’.

Although these first generation probes nicely prove the concept of using fluorescence to selectively detect sulfane sulfurs, there are major challenges to overcome. Both of these probes can cross cell membranes to enter cells, but they do not stay in the cell very long. Future work by the team will focus on developing derivatives that can overcome this limitation.

According to Xian, the most important aspect of this work is that it will allow scientists to answer a much debated question – are sulfane sulfur species, rather than hydrogen sulfide, the true messenger molecules responsible for a number of important regulatory effects in biological systems? These processes include syntheses of certain vitamins, as well as the activation and inhibition of enzymes. Solving these queries will help to unravel mechanisms of disease and ultimately lead to more effective treatments.