Using peptides to control crystal growth could lead to more active catalytic surfaces that are not currently accessible, experts say

Researchers in the US have developed a new approach for controlling crystal growth, borrowing tools from biology.

Some crystalline materials can behave very differently as catalysts depending on the crystal surface used, says Yu Huang of the University of California Los Angeles. ’If we were able to use biomolecules to produce just one particular shape, it would increase the efficiency of these catalysts.’

In the ’capping’ method, crystals are shaped by binding molecules to preferred facets, inhibiting their growth and directing atoms to pack onto the uncapped facets.

The capping molecules must sense the subtle variations in the surfaces of different crystal facets. For instance, the atoms on the face of a platinum cube are in a face-centred cubic arrangement, but those on a tetrahedron are hexagonal. The discovery of such discriminating molecules has been haphazard, which has led Yu Huang of the University of California Los Angeles and her colleagues to propose a new approach. 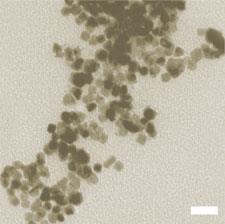 Huang’s team turned to biology’s millions of years of experience in developing molecules with very specific binding tastes. They used a technique known as ’phage display’, in which peptide sequences, from a library of a billion different combinations, are encoded into the DNA of viruses.

Those peptide sequences appeared as proteins in the virus membranes, and by exposing the viruses to a particular crystal facet, the researchers could discern how well they attached. The team selected two peptide sequences this way, one which bound to platinum cubes and the other to octahedra.

To make the crystals, Huang and her colleagues mixed chloroplatinic acid with peptides. A shot of sodium borohydride reduced the platinum ions suddenly, kicking off crystal growth. By the end of thirty minutes, 70 per cent of the crystals bound to the octahedron’s peptide sequence had become tetrahedra, a shape with identical facets.  The peptide for cubes had a similar success rate, forming crystals with 7.5nm dimensions.

Although the binding mechanism is unknown, the researchers conjecture that the aromatic group on the tetrahedron peptide may prefer the hexagonal formation of the platinum ions. They also suggest that oxygen of the hydroxyl groups at the end of the other peptide sequence may be bridging two adjacent platinum atoms on the cube surface.

Sara Skrabalak of the University of Indiana says the work could lead to highly reactive surfaces that are presently impossible to achieve in nanocrystals: ’It will be exciting to see how this approach develops.’