Shining a new light on nanowires

Scientists in the US have created tiny solar power cells using silicon nanowires 200 times thinner than a human hair. The cells could provide renewable energy for both nano- and large-scale applications, the researchers say.1

Charles Lieber, who worked on the project at Harvard University, Massachusetts, told Chemistry World. ’This work is the first demonstration of an all-inorganic fully-integrated nanoscale photovoltaic device.’ Previous designs have required the addition of other materials, such as organic dyes and polymers, to produce power efficiently. 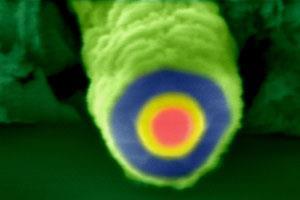 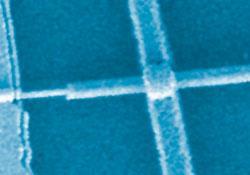 Scanning electron microscope image of a coaxial nanowire photovoltaic device, with one metal contact on selectively etched p-type Si core, and one contact on the outer n-type Si shell

The innermost core layer is a ’p-type’ silicon nanowire, which is grown using nanoparticle catalysts. On top of this wire, two shells of nanocrystalline silicon are carefully added, to form a multi-layered wire. ’The two types of outer shells - intrinsic and n-type - were essential for integrating a complete photovoltaic function into a single nanowire,’ Lieber explains. ’Importantly, these shells had to have a nanocrystalline structure as this is central to achieving good light absorption in the structure.’

Incoming light generates electrons in the outermost n-type layer, which causes a lack of electrons in the central p-type layer. This produces a current in the wire, which the team used to power a simple nanoscale circuit. To create the circuit, individual nanowire power cells were selected and ’clipped’ using chemical etching to expose their p-type cores. The team then attached the core and the outer n-type layer to metal contacts to make a circuit and measured the solar cell’s electrical properties.

Lieber and his colleagues will continue to investigate the capabilities of these power cells, focusing particularly on their potential for integration into nano-scale circuit designs.

Nathan Lewis, a professor of chemistry at the California Institute of Technology, works on similar projects. He told Chemistry World, ’This research is interesting. Recently published work 2 [by my group] has indicated that the voltages on these nanoscale devices can possibly be improved by a factor of two. This would certainly allow the production of an efficient solar energy conversion device.’