A new silicon-based anode could greatly increase the storage capacity of lithium ion batteries - boosting the runtimes of devices such as laptops and mobile phones by up to seven times, according to researchers in South Korea.

Rechargeable lithium ion batteries are common power sources for a range of electronic devices, and are also being evaluated for hybrid electric cars - but their capacity is struggling to keep up with power demands.

Lithium ion batteries generate electrical current from the movement of lithium ions from a graphite anode to a metal-based cathode. When the battery is being charged, lithium ions travel back to the graphite anode, where they are trapped. However, graphite has a relatively low storage capacity - so switching to a material that can hold more lithium ions would allow batteries to last longer.

Studies have recently focused on using silicon, which forms lithium alloys and can hold much more charge than graphite. But silicon swells by up to 300 per cent when the alloy forms, and then shrinks again when the lithium ions are released. After a few cycles of recharging, the structure of the silicon begins to crumble away and can no longer hold the ions effectively.

Now, Jaephil Cho and colleagues at Hanyang University in South Korea believe that they have solved this problem by making a porous silicon material that can accommodate this expansion and contraction. This material was made by heating silicon dioxide nanoparticles with a silicon-based gel at 900?C under argon. The silicon dioxide was then etched away, leaving a network of interconnected silicon crystals coated by a thin layer of carbon. 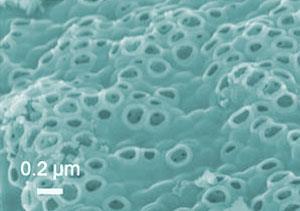 Thin pore walls ensure the material can swell without fracturing

The resulting structure contains pores with thin silicon walls, only around 40nm in thickness. These allow the structure to ’breathe’ - so that even after expanding and contracting over 100 recharge cycles, the material retains its structural integrity. Cho’s team demonstrated this by continuing to store an electrical charge of more than 2800 milliampere hours per gram - a figure that is around seven times higher than graphite.

The manufacturing process is simple and should be easy to scale up, the team say - noting that they are already collaborating with a battery manufacturer. The team also add that the greater storage capacity does not necessarily mean that the battery takes longer to charge. The highly porous structure can quickly be filled up - allowing for rapid charging and discharging if required. This may allow it to find uses for higher-powered applications such as hybrid cars.

’I think this is a particularly clever approach and should be quite a significant advance in the field,’ says Steven Hackney, an expert on battery design at Michigan Tech, US. ’However, since the material has a very high surface area, they may need to be careful as interactions between the anode and electrolyte could be damaging to the operation of the battery.’

’The performance of this new material is impressive,’ agrees John Irvine, who studies anode materials at the University of St Andrews, UK. ’This advance should also allow smaller and more lightweight batteries to be built, while maintaining safe operation.’