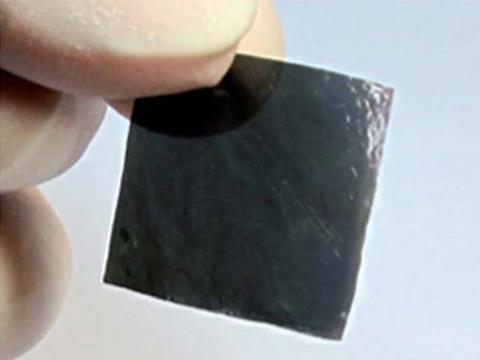 Supercapacitors based on carbon nanotubes and conducting polymers have higher energy densities (amount of energy stored) than pure carbon nanotube-based ones, but they suffer from lower power densities (amount of power). This is because the polymer layers overlap, leading to poor electrical conductivity. Now, scientists from China, Australia and Singapore have changed the design to increase the power density. The ultrathin supercapacitor could have potential uses in lightweight and flexible storage devices for portable electronic devices.

Weiya Zhou from the Chinese Academy of Sciences, and colleagues, used what they call a skeleton/skin strategy to make the improvement. The carbon nanotubes (single-walled carbon nanotubes – SWCNTs) are the skeleton and the polymer layers (polyaniline – PANI) are the skin. The skeleton/skin structure ensures that the films are better conductors than conventional SWCNT/PANI electrodes.

‘Electrons can be transported continuously through the skeleton/skin architecture,’ says Zhou. ‘In the SWCNT/PANI network, interbundle junctions and continuous connections with SWCNT–SWCNT contacts ensure low resistance.’ So, they found that the film’s conductivity was higher than that of SWCNT/PANI electrodes with overlapped PANI–PANI contact, which led to improved power density.

‘Thin and flexible energy storage devices are desired in many electronic devices that require flexibility,’ says George Chen, an expert in electrochemical technology from the University of Nottingham, UK. Flexible phones or other personal electronic devices would make usage convenient and more reliable, he adds. Also, ultrathin supercapacitors can help to reduce the volume of the whole device and allow installation of additional functionalities in place of a bulk battery. ‘There are many applications of ultrathin supercapacitors (or batteries), for example imagine just wearing them, instead of carrying them in your shoulder bag, when boarding a flight,’ he says.

He does caution that the work is still at the early stages of development and that improvements are needed before commercial ultrathin supercapacitors become a reality. ‘For example, the device as reported exhibited negative deviation from theoretical predictions, which means the actual energy capacity was likely lower than reported,’ he says. ‘Also, the device suffers from a fast loss of stored energy, known as self-discharge. Reasons for such non-ideal behaviour are still not known and call for further research in terms of fundamental science and practical engineering.’