Chemists in the US have devised a new route to (-)-cyanthiwigin F, a complex biomolecule active against tumours. The highly efficient nine-step synthesis requires no protecting groups and could easily be adapted to make similar molecules in the same family. 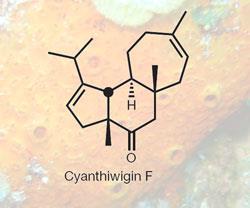 Cyanthiwigin F was isolated from a Jamaican sea sponge

Isolated from the Jamaican sea sponge Myrmekioderma styx, only two out of thirty possible cyanthiwigin structures have been made synthetically - and consequently only tiny amounts have been available for study. This new route should enable investigations into the promising anti-tumour activity of cyanthiwigin F, as well as other members of the broader cyathin class.

Previous difficulties in synthesising the cyanthiwigin family stemmed from controlling chirality at the 5- 6- and 7-membered rings that are fused together at the core of the molecule. The secret to this tidy new synthesis is a double alkylation reaction using a chiral palladium catalyst. This creates a key intermediate - with two chirally-controlled quaternary carbon centres installed - in a single step.

’Our reaction produces the two most challenging stereocentres at the same time,’ says Brian Stoltz, who led the research at the California Institute of Technology. This particular reaction was developed by Stoltz’s team back in 2004, but this is its first practical use.

The rest of the synthesis is also highly optimised - seven of the nine steps involve C-C bond formation and directly contribute to building the molecular skeleton. Four of these are especially productive, adding two C-C bonds at the same time.

Andrew Phillips at the University of Colorado published the total synthesis of (+)-cyanthiwigin U in 2005 and has worked on many similar biomolecules. ’Making this class of molecule typically takes around 25 steps - it is a real achievement to reduce this to nine and avoid using any protecting groups,’ says Phillips. ’These are standards that the field should be aiming for.

’Another big advantage of this synthesis is the oxygenation on the central 6-membered ring, which allows access to make a larger subset of cyathins,’ Phillips adds.

With all steps giving over 50% yield, and excellent stereo-control throughout the process, the team believe that useful amounts of the compounds can immediately be made using this general method to further test their medicinal properties.

’The efficiency of our route gives us a lot of options,’ says Stoltz. ’We first need to determine which are the most effective structures. Then we plan to carry out some investigations in collaboration with the City of Hope Cancer Center in Duarte, California.’