We all know how important sunscreen is to protect us from UVA and UVB rays that can cause cancer and burn skin. But the sunscreen you use could be damaging you by transporting small organic molecules through your skin. Some of these chemicals, which are used in the sunscreen as UV filters, can affect fertility. 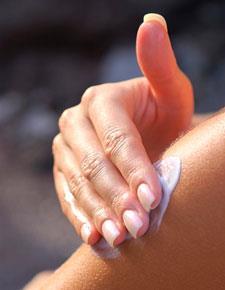 The sunscreen combines the advantages of inorganic and organic formulas

Inorganic sunscreens based on titania (TiO2) or zinc oxide particles are less prone to transport across the skin but these compounds may catalyse reactions promoted by light; for example, to produce free radicals, which are implicated in cancer and ageing.

Supason Pattanaargson Wanichwecharungruang and colleagues at Chulalongkorn University in Bangkok have combined the advantages of both types of sunscreen by making a hybrid polysilsesquioxane (complex silicate) particle that contains organic chromophores as part of an inorganic structural network. The two components work synergistically as the organic chromophore absorbs UV light, which is then scattered by the particles. The resulting nanospheres are more effective than commercial sunscreen at absorbing UV light.

Wanichwecharungruang wanted to create a hybrid material that would absorb light without generating free radicals, that was not sticky like conventional organic sunscreens, and his motivation was personal. ’My skin cannot tolerate much titanium dioxide, however, with organic sunscreen I have to put up with the sticky feeling of the product,’ he says. Since the organic chromophores are bound to the inorganic network of the particles, they are less likely to be absorbed into the circulation than small organic molecules.

In addition, because the polysilsesquioxanes are porous they can be loaded with a fragrance or drug, which is released slowly to permeate the skin. The team tested their nanospheres with citronellal, an insect repellant, and found that the scent was preserved much longer than if it had been applied directly.

Juan Vivero-Escoto, an expert in drug delivery using silica nanoparticles from the University of North Carolina, US, agrees that the sunscreen could also be used for delivery and slow release of topical drugs. Particularly appealing to him is that the two components achieve more together than they could do in isolation. He suggests that the researchers ’could integrate more functionality into the system, for example, use two chromophores in one nanoparticle to increase the range of UV absorption’.