Washing raw potatoes in an enzyme solution - or even in water alone - can reduce the levels of a potential carcinogen produced when cooking French fries.

That’s the message of research teams from the Leatherhead Food International laboratory in Surrey, UK, and a joint Chilean-Danish team, who have published studies describing different methods for reducing acrylamide generation during the frying process. 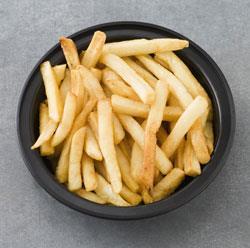 Has acrylamide had its chips?

Acrylamide is produced as result of the Maillard reaction between a reducing sugar, such as glucose or fructose, and an amino acid - in this case, asparginine. The Maillard reaction is a key part of the browning process in baked and fried foods, and so acrylamide is found in a range of foods such as bread, biscuits, potato crisps, and also in some drinks such as coffee.

The compound has long been known to be a neurotoxin and is carcinogenic in laboratory rodents, but finding evidence to establish a link between dietary exposure and human cancers proved elusive. But last year Dutch researchers confirmed an association between acrylamide and uterine and ovarian cancers in women, and more recently Danish researchers have reported an increased risk of breast cancer, Kit Granby of the Danish National Food Institute, Soeborg, told Chemistry World.

Granby and her colleagues describe the effects of a two-stage process intended to be used by commercial manufacturers producing part-cooked and frozen fries for homes and restaurants [1]. The potato strips are first blanched in hot water, dried and then soaked in a solution with the enzyme asparaginase, which hydrolyses the asparagine’s amide group to form aspartic acid and ammonia. The enzyme is made by the Norwegian company Novozymes, using a genetically modified strain of the same fungus (Aspergillus oryzae) used in manufacturing soy sauce.

"If we are prepared to accept pale chips then these authors have solutions to the acrylamide problem" - Bronek Wedzicha, University of Leeds

Blanching reduces levels of asparargine and sugars on the surface of the raw potato and also causes its starch granules to swell, increasing the diffusion of the enzyme through the surface layer.

But neither heat treatment nor enzymes are essential for cutting acrylamide levels. Rachel Burch and colleagues at Leatherhead simply soaked raw potato at room temperature for up to two hours and found the resulting fries had up to 48 per cent less acrylamide, depending on the strain of potatoes used [2].

A pale chip is a sorry sight

However, food scientist Bronek Wedzicha of the University of Leeds warns that efforts to reduce acrylamide levels may have detrimental effects on the appearance and flavour of the food. ’Neither of the research papers claims that the colour is the same as in the control,’ he says. ’If we are prepared to accept pale chips, and presumably chips which lack the flavour, then these authors have solutions to the acrylamide problem. But why not boil the potatoes instead and cut out the fat?’