Sponges to mop up marine methane 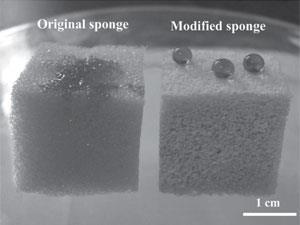 The modified sponge can soak up methane but not water

It may seem like the story from a children’s cartoon, but Chinese scientist’s claim that their sponge could suck up methane from the oceans,1 helping fight climate change and providing a new energy source at the same time.

When we think of global warming we often think of CO2 as the culprit, but methane, CH4, is actually 25 times more potent a greenhouse gas over 100 years. While there is some already in the atmosphere, most of the Earth’s methane sits under the ocean floor. As the planet heats up, methane migrates out of the sediments and bubbles up to the atmosphere, further heating the atmosphere in a huge positive feedback loop.

Lei Jiang’s group at the Beijing National Laboratory for Molecular Sciences, had previously shown that superhydrophobic materials, by their very nature, are also good at absorbing gases.2 For example, when gas bubbles hit the surface of the classic lotus leaf they burst and spread across the surface. However, lotus leaves don’t have very large surface areas, so can’t absorb much gas.

Instead, Jiang’s group functionalised polyurethane sponges, just like you might use in your kitchen, with a nanoparticle/polymer composite that made the sponges hydrophobic. Not so good for soaking up kitchen spills but, as the group showed, great for soaking up methane bubbles.

Of course, whether this will actually be used in the oceans to prevent methane emissions is far from certain, as Martin Schroder of the University of Nottingham, UK explains: ‘This is primarily academic work and the practicality of actually using such a material in the oceans where there is significant water movement is not proven, but the idea and basic concept are very interesting and intriguing. Trapping bubbles like this seems a “leftfield” idea but it appears to work.’