Chemists have discovered that small structural differences in oligosaccharide clusters can lead to dramatic differences in the way they interact with the body. They hope their research can have uses in diagnosing diseases such as cancer.

Oligosaccharides, also known as glycans, are carbohydrates made of more than four or five sugars linked together. Found throughout the body in the form of glycoproteins and glycolipids, they play an important role in processes such as cell-cell recognition and protein folding.

While researchers know that oligosaccharides are important, studying how they mediate specific processes is tricky. To resolve this, Koichi Fukase from Osaka University, Japan, investigated the dynamics of a number of oligosaccharide clusters in vivo. 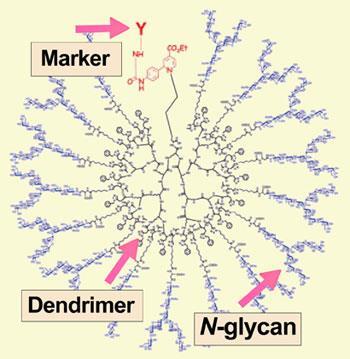 Oligosaccharide structure can dramatically affect the dynamics of metabolic uptake

Fukase and his team synthesised a number of N-glycan clusters - oligosaccharides linked to the amino acid asparagine - and traced their movement in mice via both fluorescent and radioactive labels. Their results showed that small structural differences had a dramatic difference on N-glycan behaviour.

The team found that clusters with a sialic acid functionality were stabilised in the body, travelling to the spleen, while the same cluster without the acid was rapidly excreted via the bladder. Likewise, changing the position of the sugar-acid linkage also altered the glycan’s activity. Linking at the 3’ rather than the 6’ position on the sugar resulted in the glycan being quickly cleared from the body.

’People believed that oligosaccharides might have similar functions,’ says author Katsunori Tanaka, ’but we found that slight differences made them go to completely different organs. That means that very small differences can change the function in the body.’

The team also found that the oligosaccharides behaved differently in cancer models and normal mice models. The oligosaccharide which did not contain any acid, for example, was significantly stabilised and stayed longer in the body when tumours were present. They hope this difference in activity could be applied in new diagnostics.

Geert-Jan Boons at the Complex Carbohydrate Research Center at the University of Georgia, US, says the team’s observations are surprising. ’In the long run this could have important implications for our understanding of what carbohydrates do and how this could perhaps be exploited in drug delivery or drug development,’ he says.

The team is now investigating the mechanism behind these dynamics. ’We don’t know the reason for [this behaviour] yet. This is our next target,’ says Fukase.