Complex life could have existed on Earth 400 million years earlier than thought, according to sulfur isotope signatures found in ancient rocks

Earth’s atmosphere could have supported complex life 400 million years earlier than thought, according to sulfur isotope signatures found in some of the oldest rocks on Earth.

John Parnell and colleagues at University of Aberdeen, UK analysed the change in ratio of 34S to 32S in sulfate versus sulfide in the ancient rock samples, allowing them to get a glimpse of the environment in which the rocks were formed.

The team collected samples rich in sulfur containing compounds, such as iron pyrite (FeS?2), from rocks near Lochinver in the north-west highlands of Scotland. They then extracted the sulfur chemically or using a laser and analysed the isotopic ratios using mass spectrometry. They found a very large discrepancy in the 34S to 32S ratio between sulfate and sulfide in rock samples up to 1.2 billion years old. 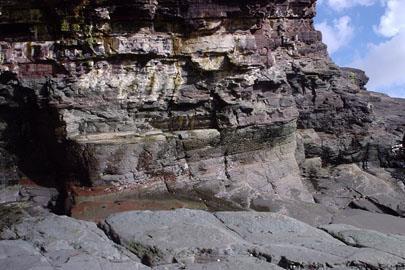 A large difference between the isotopes suggests more complex processes at play during the time the rocks were formed than standard sulfate reduction. Fractionation of 34S in this way is one of the key indicators of environmental oxygenation, and is largely associated with sulfide-oxidising bacteria - thought to be one of the first forms of life on Earth - participating in the sulfur cycle, using oxygen from the environment to generate energy.

An oxygen environment developed enough to support such bacteria was only thought to have evolved around 800 million years ago. This latest research now indicates that the evolution of these bacteria could have occurred as much as 400 million years earlier.

’The data shows that there was enough oxygen in the atmosphere at this time for the evolution of these bacteria to occur,’ says Parnell. ’This means the conditions were there a lot earlier than we first thought, and that when something else happened that gave evolution a jump start, the atmosphere was already in place,’ he adds.

’This is nice evidence for an oxygenated terrestrial environment, but also for a complex microbial ecosystem in the soil and gives us a very nice glimpse into the world of soils 1.2 billion years ago,’ says Graham Shields, an expert in sedimentary geochemistry at University College London, in the UK. ’In the future, people will take this data and probably put it into a model and provide some constraints to determine the actual amounts of oxygen in the environment at this time,’ he adds.