Scientists in the US have built a lithium based ’super battery’ that releases its charge 100 times faster than a regular rechargeable. They say their design has applications in renewable energy storage and will help researchers build a better battery for hybrid electric vehicles.

Lithium ion batteries are already ubiquitous in consumer electronics. They are the rechargeable batteries widely used to power mobile phones and laptops. But scaling these up for electric cars, for instance, requires a dramatic improvement in charge and discharge rates - otherwise a plug-in electric vehicle would need to be plugged in for many hours to fully recharge.

Byoungwoo Kang and Gerbrand Ceder at the Massachusetts Institute of Technology have now developed materials for a high power battery that discharges in just 10-20 seconds. ’We show that by simply tweaking the composition of the battery material we can achieve fast charging and discharging rates - like a supercapacitor - while keeping energy density comparable with a battery,’ says Kang. 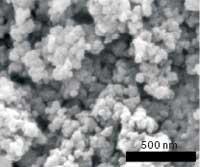 The LiFePO4 nanoparticles are less than 50nm in size

The team’s battery is based on lithium iron phosphate (LiFePO4) nanoparticles with a five nanometre thick glassy coating in which the levels of iron, phosphorus and oxygen are reduced. In a battery, charge and discharge rates depend on quick delivery of lithium ions and electrons to the material. According to the researchers, their glassy coating has high Li+ mobility and helps speed the delivery of the ions.

Although other groups have tried coating battery materials in conducting glasses, Peter Bruce, an electrochemist at the University of St Andrews, UK, says none have shown any improved rate capability by doing so. ’The thing that interests me most is not so much the absolute rate of charge and discharge, but more the fact that the coating of the particles by this lithium conducting glass seems to enhance the rate of the lithium phosphate material,’ he says.

Lithium ion phosphate is one of the topical materials for high rate applications, says Bruce, and so increasing its rate performance is likely to be useful technologically. However, he points out that the study focuses on discharge rates, whereas a battery for a hybrid vehicle would need to charge and discharge rapidly.

But Kang argues their strategy should improve both charging and discharging rates for lithium batteries and could improve the performance of electric cars. ’If our material applies to hybrid vehicles, short time charging and the acceleration of the speed can be achieved,’ he says.