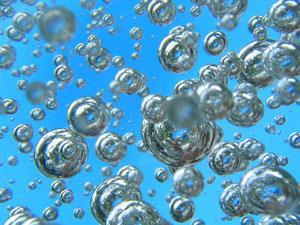 Experiments carried out by scientists in the US have provided new evidence in the controversial issue of surface freezing in alkane nanodroplets.

For small droplets, or systems with free surfaces, such as those in atmospheric aerosols, the freezing mechanism of hydrocarbons is a highly debated topic. Until now, experimental techniques have not been able to distinguish between surface and volume freezing.

Barbara Wyslouzil and colleagues at the Ohio State University, Columbus, are interested in understanding phase transitions and organization in nanodroplets. ‘Since surface-to-volume ratio increases as objects get smaller, nanodroplets present an obvious advantage for the study of surface effects,’ says Wyslouzil. Nanodroplets of n-octane and n-nonane were formed and rapidly cooled in a continuous flow supersonic Laval nozzle. As the condensable carrier gas mixture flows through the nozzle, the flow accelerates, effectively cooling as the pressure and temperature drop. This first condenses the vapour to liquid droplets, then freezes them.

Observing these ultra-small droplets using Fourier transform infrared spectroscopy (FTIR) showed multiple phase transitions. By quantitatively comparing spectra of the droplets to normalised spectra of the vapour, liquid and solid phases, Wyslouzil’s team were able to determine the fraction of solid material increasing as the droplets crystallised. ‘We found that freezing is a two-step process, surface freezing followed by freezing throughout the rest of the droplet,’ says Wyslouzil. The step increase in solid mass fraction shows the formation of a single frozen layer of molecules – a monolayer – at the droplet surface before the rest of the droplet freezes. This two-step freezing is supported by molecular dynamics simulations. Pressure trace measurements and small angle X-ray scattering, both techniques used to characterize these small droplets, are unable to detect the monolayer freezing separately from the freezing of the bulk droplet.

Looking to the future, Wyslouzil says ‘identifying the forces that drive surface ordering in alkanes is a particular challenge.’ She adds that the mechanism of freezing is still an open question, and her group plan to extend their study to investigate how alkane chain length affects surface ordering. Wyslouzil comments that studies of shorter chain alkanes will be challenging, because of the very low temperatures required.

Ruth Signorell, an expert in the analysis and modelling of aerosol particles at ETH Zurich, Switzerland, comments that ‘this is the first experimental step towards understanding surface versus volume freezing in these nano-sized systems.’ However, she warns that the method may not be broadly applicable to other chemical systems, such as hydrocarbons that undergo surface and volume freezing on different timescales. ‘It would be interesting to find a general rule that determines for which systems surface freezing is important and for which it is not. I would expect this to be strongly compound dependent.’