Sweet-toothed bacteria make their own vaccine

With careful feeding, bacteria can produce vaccines against themselves, scientists in the US and China have found. If proven safe, the method could greatly simplify the process of making vaccines against dangerous bacterial illnesses, such as pneumonia.

’Bacteria grow lots of polysaccharides (complex sugars) on their surface - it’s similar to the way humans grow hair,’ says Peng George Wang, one of the authors of the study at Ohio State University, US. These sugars form the outermost layer of the bacteria and play a critical role in how they interact with immune cells in the body.

By attaching these tell-tale sugars to carrier proteins, they can be injected into the body to provoke an immune response, building up resistance against the bacteria and acting like a vaccine. But the sugars alone are typically not enough to trigger a strong immune response. 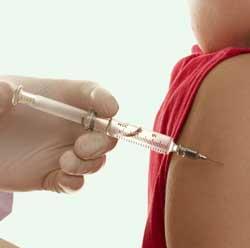 ’For a vaccine, you need to make the polysaccharides more active,’ Wang says, but the modifications needed to boost activity can be difficult. Now, Wang and colleagues at Shandong University and Nankai University in China, have found a much simpler way to do this. By supplying the bacteria with ready-modified sugars, the team discovered that the bacteria take them up and incorporate them into the structure.

The team demonstrated the technique by switching one of the sugars in Escherichia coli for a number of different analogs. Wang hopes that by harvesting the sugars from mutated bacteria like this, vaccines against a wide variety of bacterial illnesses could be created and produced cheaply.

The lab have already started investigating the potential for a new vaccine against the pneumococcus bacteria - which is typically responsible for causing pneumonia - funded by a $100,000 grant from the Bill & Melinda Gates Foundation. Although vaccines against pneumonia are currently available, at around $50 per injection they are too costly for use in the developing world.

’This is an innovative strategy to reengineer a metabolic pathway,’ says Chris Whitfield, a cell biology expert at the Universityof Guelph in Ontario, Canada. ’Other bacteria and other pathways should be amenable to similar approaches and the cell surfaces can be modified in many different ways.’

There are also other possible applications for the technology, Whitfield thinks. ’One can envisage exploiting these structures to follow pathogens in cells and tissues,’ he adds. ’Also, the modification provides a robust scaffold on the cell surface for applications such as targeted delivery of specific ligands and prodrugs.’
Lewis Brindley