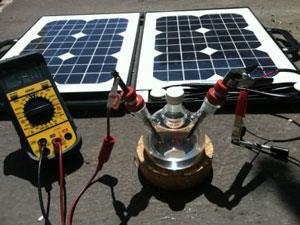 Scientists in the US are calling upon the synthetic organic chemistry community to stop ignoring electrochemistry and have shown the two fields can work together to perform more sustainable reactions. And, to make the union even greener, it’s all powered by sunlight.

When a compound is oxidised, another one is reduced. In electrochemical oxidations, chemoselectivity is based solely on the oxidation potential of the functional groups in solution. Chemical oxidants, on the other hand, can be designed to select for a particular functional group based on criteria like steric effects or chirality. But the metal oxidant often required for chemical redox reactions ultimately results in reagent waste.

Now, Kevin Moeller and his team at Washington University in St Louis, have shown that electrochemistry can be used to conduct chemical oxidations that consume only sunlight and produce only hydrogen as a reduction product. They connected a reaction flask to a photovoltaic cell and on exposure to sunlight a constant stream of electricity passes through the system. The electricity enables a chemical oxidant to serve as a mediator for the reaction that then gets regenerated at the anode. Seven different reactions, including an asymmetric oxidation reaction, were tested in Moeller’s photovoltaic system and yields were almost the same as traditional methods.

‘Too few organic chemists utilise electrochemistry as a synthetic tool in spite of its potential advantages,’ explains Moeller. ‘We wanted to show just how easy it was to carry out the reactions in this manner.’

But Moeller is not the only researcher who thinks that electrochemical routes are underexploited. ‘Moeller has realised that simplicity is key in developing new versatile synthesis methods and he is combining this with electricity from solar cells to further emphasise the principle of waste minimisation,’ says Frank Marken, an electrochemistry expert at the University of Bath. ‘I completely agree with this approach and I am sure there will be much more of this type of work in the near future.’

Moeller and Marken both have high hopes for organic electrochemistry in the coming years. ‘The future could be multi-step electrosynthesis where energy is re-used and oxidation–reduction processes are paired to optimise yield and efficiency,’ says Marken.

Further work from Moeller will focus on highlighting the method to the synthetic community at large.