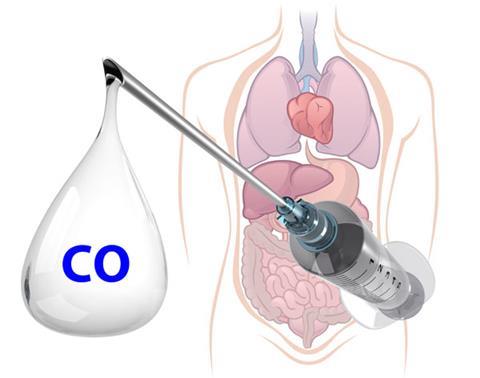 Scientists in the US have created a gel that can be used to deliver therapeutic carbon monoxide gas to selected organs in the body.

CO has a role in the body as a biological signalling molecule (as a neurotransmitter and a blood vessel relaxant, for example) and its delivery to tissues for therapeutic use for conditions such as cardiovascular disease and organ transplantation is done by inhalation therapy. This technique is risky, though, as overexposure to CO in this way can be poisonous, and the CO cannot be targeted to any organs other than the lungs.

More recently, small molecule CO-releasing molecules (CORMs) have been developed as an injectable targeted delivery method. However, the molecules – commonly used metal carbonyls, and the more recent polymeric micelles – have short half-lives and are not retained in tissues, which limits their use.

Samuel Stupp from Northwestern University, and colleagues, who previously developed self-assembling peptide-based materials to deliver another biological signalling molecule – NO – have now turned their attention to the problem of delivering CO. His team combined a peptide amphiphile (PA) designed to self assemble into a fibrous gel with a ruthenium carbonyl complex similar to a known CORM. They reacted the resulting compound with sodium methoxide to generate the CO-releasing PA. The PA self-assembled into nanofibres 8.2nm in diameter.

The CO release performance of the soluble PA gave a similar half-life to known CORMs.  The PA was, however, designed to form a gel, which was achieved by adding CaCl2 to the solution. ‘Gel formation slowed down CO release dramatically, from a half-life of 2.1 min for the soluble peptide to 17.8 min after gelation,’ says Stupp. This prolonged release could significantly improve the utility of CO therapy.

‘This work will add to the regenerative medicine toolbox by enabling researchers to modulate biological signalling through the delivery of a very simple diatomic gas,’ says Stupp.

Bing Xu, an expert in bionanomaterials for drug delivery from Brandeis University, US, says that the system’s future development could lead to a material that significantly outperforms current CORMs. ‘The demonstration of the delivery of therapeutic CO expands the horizon of PA applications,’ he adds.