Australia's synchrotron, due to open this year, set to be a jewel in Australian and New Zealand science

Australian scientists have launched a vision that sets out the next 10 years of synchrotron science in the country. Australia’s synchrotron, which will open this year, will be a jewel in Australian and New Zealand science, they predict.

The 10-year plan, Accelerating the future - a plan for Australian synchrotron based science 2007-2017, was developed over two years by an expert committee and has been endorsed by the Australian Academy of Science, the Australian Academy of Technological Sciences and Engineering, and the Royal Society of New Zealand. It was launched by the committee’s chair, Keith Nugent, professor of optics at the University of Melbourne. 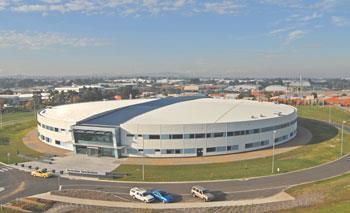 Nugent said the plan is ambitious but achievable. It aims to put Australia in world leading status in some areas, such as phase-contrast imaging, in which Australia has a real strength, he said.

There is no funding allocated to achieving the plan. ’We took the view that we were not going to worry about where the funding would come from. We wanted to have a plan for where the priorities lie and use that as a basis for lobbying for further funding,’ said Nugent.

The plan has been well received by Australia’s researchers. ’While it is not possible for everybody to be pleased by any developmental plan, the vast majority of the scientific community do appear to appreciate the structure and direction of the plan,’ said Andrea Gerson, director of the applied centre for structural and synchrotron studies at the University of South Australia. ’The next few years will be very important for the Australian synchrotron as it consolidates on the first nine beamlines and recognises the growing needs in other scientific areas.’

Peter Lay, from the University of Sydney’s school of chemistry, said that the way the synchrotron is funded and managed in future will either make or break the facility.