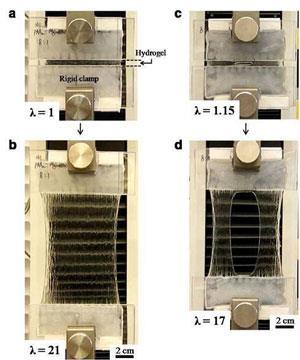 Exceptionally tough and stretchy new hydrogels have been developed by US and South Korean scientists.1 The gels, which may eventually find applications in contact lenses and tissue engineering, are 10 times tougher than cartilage and can stretch to 20 times their original length without suffering permanent damage.

Most hydrogels are brittle and not easily stretched. For this reason, hydrogels haven’t traditionally been considered as structural materials. But the fact they can encapsulate organic polymers makes them more suitable than, for instance, metals for interfacing with cells and tissues. In recent decades, researchers have begun trying to improve the properties of hydrogels in the hope of creating stronger, tougher, biocompatible materials.

A landmark was reached in 2003 when a Japanese team reported2 making a hydrogel with a fracture energy – a measure of resistance to fracturing or ‘toughness’ –  of more than 1000Jm-2, similar to natural cartilage. Zhigang Suo at Harvard University and his team have now unveiled a gel with a fracture energy of around 9000Jm-2, meaning it’s almost as hard to break as rubber. ‘The moment we put the material together, its behaviour was just spectacular – even without detailed measurement, just playing with it in your hands,’ says Suo. ‘The material property is orders of magnitude better than other reported values.’

Like the Japanese team’s hydrogel, Suo’s version incorporates two different networks of polymers, but it also makes use of two very different types of crosslinks. The first polymer, alginate, is crosslinked by ionic bonding between calcium ions. It can ‘unzip’ to relieve stress and reform again afterwards – even if the gel loses some of its stiffness through stretching, the researchers can ‘re-zip’ the alginate network with heat. The second polymer, polyacrylamide, is covalently crosslinked, remaining intact under stress to bridge cracks. However, it’s not clear precisely how the two tangled networks interact.

‘It’s a very elegant idea,’ says Vitaliy Khutoryanskiy, a materials scientist at the University of Reading, UK. ‘They’ve used very simple chemistry but achieved fantastic results.’ The team’s approach is one that could be used as a guiding principle for making other more durable hydrogels, he adds.

Hydrogels are already used in contact lenses, drug delivery and tissue scaffolds, so Suo is sure tougher hydrogels will have ‘numerous applications’. ‘The biggest application people talk about is cartilage replacement,’ he says. ‘At the moment, there isn’t really any cartilage replacement – you have to replace your knee with metal.’ But he won’t yet suggest that his material could provide a cartilage replacement, as characteristics such as biocompatibility still have to be considered.