Scientists have characterised a new form of elemental boron - a notoriously hard element to synthesise in a pure form - and found that ionic bonding helps hold the structure together.

There are at least 16 known polymorphs of boron, but only three of these are thought to correspond to the pure element. Now Artem Oganov from Stony Brook University, New York, US, and colleagues have made a new structure to add to the list. Termed gamma-boron, their new form of boron is made up of two forms of boron clusters - B2pairs and B12 icosahedra - arranged in a sodium chloride type structure.

’When I first saw the structure I was very surprised,’ says Oganov. B2 pairs and B12 icosahedra - clusters of twelve boron atoms arranged in a regular 20 sided polyhedron - are well known in boron chemistry, but Oganov’s team found that differences in electronegativity between the two forms led to partial ionic bonding. ’It is, say, 90 per cent covalent,’ says Oganov. ’But the ionic component is significant and that is something that we really didn’t expect.’ 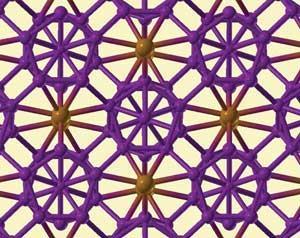 The gamma-boron cluster, showing the B2 (yellow) and B12 (purple) clusters

The B2 pairs and B12 icosahedra act as anions and cations, respectively, affecting other properties of the material such as the IR spectrum and electronic bandgap. Unlike other polymorphs such as alpha- and beta-boron, gamma-boron does not become metallic at increased pressure.

The new form of boron has also shed light on the element’s previously unknown phase diagram, helping to map the element’s phase changes in response to pressure and temperature. ’We have found a phase which has a gigantic stability field.’ Oganov told Chemistry World. Between 19 and 89 GPa the new form of boron is more stable than any other structure, and it also keeps its structure at room temperature and pressure. ’We have been able to find a key to the phase diagram of boron,’ says Oganov. ’It has been really embarrassing that boron was the only element for which the phase diagram was simply unknown - now we know a little bit more about how this element works’

The team determined the structure of the new material using a computational technique that allowed them to predict the most favourable positions of the atoms from just the chemical formula.

’It’s a big step in understanding the phase diagram of boron,’ says Mikhail Eremets at the Max Planck Institute for Chemistry in Germany. He was also impressed by the team’s ability to predict and determine such complex structures. ’It’s an example of fundamental breakthrough of understanding of quite a complex system.’