Soil uses sunlight to produce chemicals that can break down pollutants in the lowest layers of the atmosphere.

Soil uses sunlight to produce chemicals that can break down pollutants in the lowest layers of the atmosphere. 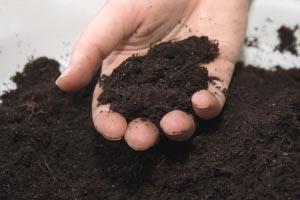 Humic acids in soil react with nitrogen dioxide during daylight hours, claim Konrad Stemmler at the Paul Scherrer Institute, Villigen, Switzerland, and colleagues. The reaction is a major source of nitrous acid, a precursor of hydroxyl radical production.

The rapid photodissociation of nitrous acid had previously led researchers to assume it was produced at night. This left unanswered questions surrounding the observation of daytime nitrous acid concentrations. Stemmler’s work suggests that up to 60 per cent of hydroxyl radicals in the lowest part of the atmosphere come from nitrous acid.

Stemmler took films of humic acid, and exposed them to nitrogen dioxide mixtures under different light intensities. The discovery that nitrous acid was produced under these conditions is a breakthrough, said Stemmler.

Humic acids, resulting from the breakdown of organic matter, are the most common organic substance on Earth’s surface. Soil acts as a massive absorber of light, because of the area it covers, and so is important in transferring nitrogen dioxide from the gas phase. ’The bare soil of the planet is a photoreactant,’ said Stemmler, ’for the first time we propose that heterogeneous photochemistry is occurring.’

Alternative proposals for converting nitrogen dioxide into nitrous acid include soot, organics at ice surfaces, or phenolic compounds, but up to now none of these mechanisms could be proven to be of any importance in the atmosphere, said Ulrich Platt, an atmospheric chemistry expert at the institute for environmental physics, University of Heidelberg, Germany. Stemmler’s results present another possibility, he said. ’The newly discovered effect is potentially important for the atmospheric radical budget, since nitrous acid photolyses quickly to form OH radicals (and NO), which in turn is a central agent in atmospheric self cleaning and ozone smog formation,’ said Platt.

Stemmler hopes the information will be introduced into air-pollution models used to set emissions targets. ’It’s a complex mechanism that has to be understood to know how measures in emissions affect air quality,’ he concluded.