US crackdown on mercury pollution

The US Environmental Protection Agency (EPA) has announced its long-awaited standards to limit mercury, lead and other toxic pollutants emitted by power plants. These are the US’s first national standards for mercury and other dangerous emissions from new and existing coal and oil-fired power plants. 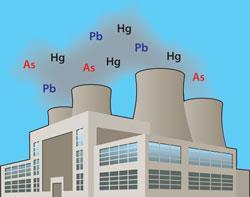 The new mercury and air toxics standards (MATS) aims to cut emissions of heavy metals, including mercury, arsenic, chromium and nickel, as well as acid gases such as hydrochloric acid and hydrofluoric acid. The EPA says these toxic air pollutants are linked to cancer and other serious illnesses.

In announcing MATS, President Obama noted that President George H W Bush signed legislation more than two decades ago requiring US power plants and others to limit the amount of mercury and other toxic gases that they were releasing, but he said that law had never been fully implemented because ’special interest groups kept delaying the process’.

’Because we are acting, emissions of mercury and other pollutants, which cause a range of health problems, including neurological damage in children, will decrease significantly,’ he said.

The EPA estimates thatthese new standards will prevent up to 11,000 premature deaths, 4700 heart attacks and 130,000 asthma attacks, saving the nation as much as $90 billion (?57 billion) each year. There are roughly 1400 units affected by this action - approximately 1100 existing coal-fired units and 300 oil-fired units. The agency estimates that the annual cost of this rule, which is due to go into effect in mid-February,will be $9.6 billion. Plants will generally have up to four years to comply with MATS.

Obama’s deputy assistant for energy and climate change, Heather Zichal, predicted that some in Congress will try to prevent these standards from being implemented. She said some will argue that these rules will damage power distribution across the US, despite independent analysis from the Department of Energy (DOE) indicating otherwise. ’Others will claim that there is not enough time to comply with these standards, despite the fact that these rules have been in the works for 20 years,’ Zichal said.

Meanwhile, the ranking Republican on the Senate Environment and Public Works (EPW) Committee vowed to overturn the MATS rules when Congress reconvened in January. Senator Jim Inhofe called the new EPA standards ’yet another costly rule that will have a devastating effect on jobs and American families,’ warning that MATS will cause electricity prices to ’skyrocket’.

The head of the Edison Electric Institute (EEI) - an association of shareholder-owned electric companies based in Washington, DC - says that the new regulations are ’the most expensive’ in the agency’s history. ’It will require a significant number of electric generating units to design, obtain approval for and install complex controls or replacements in a very short timeframe,’ said EEI’s president, Tom Kuhn. In some cases, it will mean that new transmission and natural gas pipelines will have to be built, he stated.

However, the EPA projects that manufacturing, engineering, installing and maintaining the pollution controls to meet these standards could provide employment for thousands, including 46,000 short-term construction jobs and 8000 long-term utility jobs.

Key Democratic lawmaker, Senator Barbara Mikulski who chairs the EPW committee, said the EPA’s action will ’generate jobs and protect the health and safety of families’ across the US’.

’After decades of industry-induced delay, the Environmental Protection Agency did exactly what it was designed to do: look out for our health and our environment,’ said the president of the Natural Resources Defense Council, Frances Beinecke. ’Dirty coal-fired power plants will have to clean up the toxic soup of emissions that is polluting our air and making people sick, especially children, older Americans, and other vulnerable populations.’

Legislator’s looking to clip the EPA’s wings scored a victory on 23 December when President Obama signed legislation that will cut the agency’s budget.

The legislation to fund key federal science agencies for fiscal year (FY) 2012, which began on 1 October, cut the EPA’s budget by 3% to $8.4 billion. Up until now these agencies have been financed using stopgap measures based on last year’s appropriations levels. The package also cut $14 million, or 6%, from the EPA’s clean air and climate research programmes, according to the House Appropriations Committee. It also shaved the same amount from the agency’s air regulatory programme, which amounts to a 5% cut.

Other agencies, like the National Institutes of Health (NIH), fared somewhat better under the new budget. It received a sub-inflationary budgetary bump of 1% to reach $30.7 billion. The figure is roughly $300 million above last year’s level but about $760 million below the president’s request. The measure assumes NIH will support the same number of research project grants as it did last year.

Also under the agreement, the DOE’s Office of Science - which supports fundamental energy research and is the steward of 10 of the 17 DOE national laboratories - receives $4.9 billion, an increase of about 1%.