Vitamin C's anti-cancer effects may be compromised by fat

Vitamin C may raise the level of carcinogens in the stomach rather than lower them as previously thought, UK chemists have found using a new model that for the first time includes the vitamin’s interactions with fat.

Vitamin C or ascorbic acid secreted in gastric juice was thought to protect the stomach from cancer by suppressing the formation of carcinogens called nitrosamines. Taking supplements or eating a vitamin C rich meal can boost its level in the stomach, but clinical studies have shown little evidence that vitamin C pills help to stave off cancer.

Now, Kenneth McColl and co-workers at the University of Glasgow have shown that in the presence of fat the vitamin can lead to more - not fewer - cancer-causing molecules being produced.

’This is the first time that a two-phase model of the human stomach has been used to study these reactions,’ McColl told Chemistry World. ’These results show that you need to look at both the fats and the stomach juices to get a realistic picture.’

"These results show that you need to look at both the fats and the stomach juices to get a realistic picture." - Kenneth McColl

The initial source of the problem is nitrite in saliva. As nitrite hits the highly acidic juices of the stomach, it is converted to nitrous acid, which then forms several nitrosating species like N2O3, NO+ and NOSCN. These compounds can react with amines to give carcinogenic nitrosamines - unless ascorbic acid jumps in first and deactivates them by turning them into NO.

But it now turns out that the problem doesn’t end there because you also have to consider the role of fats, which are present in food and in cells lining the stomach. While NO can diffuse into fats, vitamin C cannot follow as it isn’t fat-soluble. Once in the lipid, the NO reacts with oxygen to re-form N2O3, where with no vitamin C to mop it up it attacks amines in the lipid to produce nitrosamines.

In fact, the team says amine nitrosation occurs more easily in fat than in gastric juice. The juice is highly acidic so most of the amines are in a protonated form that is not free to react with the nitrosating species. As vitamin C helps shift nitrosation into fat by producing NO, more carcinogens are formed when it is present - not less, said McColl.

While the results demonstrate the principle, it’s difficult to say exactly how closely this mimics what is happening in the stomach, McColl told Chemistry World. For example, it is very difficult to measure the relative concentrations of amines dissolved in the lipid and in the stomach acid in a real stomach, he said. 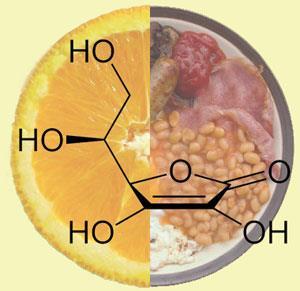 Ed Yong, from Cancer Research UK, agrees. ’This study is interesting and N-nitroso compounds have certainly been linked to stomach cancer in the past,’ he said. ’However, it’s unclear whether these reactions represent reactions as they occur in the body, as there are a huge number of other chemicals present in the stomach at any point in time. So these results don’t change our dietary recommendations for cancer prevention - results from large population studies suggest that high intakes of salted foods and red and processed meat can increase the risk of stomach cancer, while diets high in fruit and vegetable can reduce this risk.’

McColl’s team are now attempting to develop ways to sample what is happening in the stomach itself, as well as examining other antioxidants present in the diet, such as polyphenols and flavinoids.