Lone water molecules can catalyse reactions between atmospheric gases, scientists have confirmed, throwing a spanner in the works of supposedly simple atmospheric chemistry.

It’s well known that water affects the reactions of molecules in solution, by wrapping them in protective solvation shells; acting as a weak acid or base; or actively donating or accepting protons. But these classical effects are harder to detect for just a few isolated water molecules floating in the gas phase. Water is less likely to transfer protons to assist a reaction because the energy needed to break bonds can’t be returned by surrounding liquid solvation.

It’s clear that, in principle, water could form interesting complexes with radicals and polar molecules in the atmosphere. Atmospheric chemists have found evidence, for instance, that the hydroperoxy radical (HO2) may attach to water molecules via hydrogen bonds. But pinning down exactly how this might affect reaction rates seemed an intricate and hardly vital task, rather low down on the to-do list of most atmospheric chemists.

Now Bernd Abel and colleagues from Purdue University, Indiana, US, and the University of G?ttingen, Germany, have shown that water does catalyse a gas-phase reaction - and they calculate that even a single molecule of water could do the trick.

H2O + CH3O), especially at low temperatures. And their theoretical calculations suggested why: each water molecule can hydrogen-bond to an acetaldehyde molecule, making it more vulnerable to hydroxide attack. 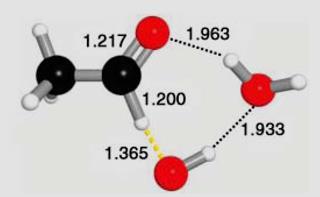 The explanation doesn’t immediately throw new light on the atmospheric reactions of acetaldehyde, which is formed when ethane hydrocarbons are oxidised in the troposphere. Rather, Abel told Chemistry World, it’s the first clear example of a mechanism that might apply to many atmospheric reactions. ’Now people know what they’re looking for,’ he said, ’they can judge whether effects like these have an impact on atmospheric chemistry models.’

’This is an important extension of our understanding the complexity of a "simple" bimolecular reaction and the role of water,’ commented John Crowley, who studies atmospheric chemistry at the Max Planck Institute for Chemistry, Mainz, Germany. As he pointed out, water may play different catalytic roles at differing points in the atmosphere: depending on how cold and dry the air is, for example, or if reactions are occurring where clouds tend to form.