Water's viscosity down to its container - at least at the nanoscale 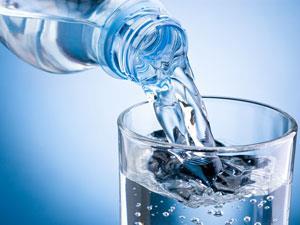 Scientists in the US have discovered that water’s viscosity is affected by the material its container is made from. The effect is only observed at the nanoscale and could lead to a deeper understanding of cell membrane transport, nanofluidics and advances in high resolution two- and three-dimensional printing.

It is well known that liquids confined between hydrophilic surfaces only a few nanometres apart exhibit a large increase in viscosity compared to the bulk, but researchers have struggled to understand why. Now, Elisa Riedo and others at the Georgia Institute of Technology have found a relationship between this apparent change in viscosity and the water–surface interaction.

Riedo and her team were investigating whether nanoscale volumes of water, such as those found in our cell membranes, diffuse in the same way as bulk water. ‘We knew the viscosity of water was different at the nanoscale, it was more like ketchup. We then looked into the chemistry behind the confining surfaces.’

The team predicted that hydrophobic materials that have lower wettability, on which water spreads less easily, would lead to less viscous water. To confirm this, Riedo measured the viscosity of water on surfaces of differing hydrophobicity by dragging an atomic force microscope tip through a layer of water just five molecules thick. ‘Depending on which material we used, we saw pretty dramatic changes in viscosity,’ Riedo explains – on hydrophobic materials, the process required less force, meaning the water was less viscous.

‘This work confronts a particularly tricky problem,’ says Susan Perkin from the University of Oxford, UK. ‘Many teams have attempted to unpick this problem and the scatter of conclusions is testament to the difficulty of performing such measurements.’ John Sader from the University of Melbourne, Australia, agrees that the work is an impressive feat: ‘Understanding the properties of molecular-scale liquid flow presents a significant challenge, with the standard tools of classical fluid mechanics being no longer applicable.’

For Christoph Salzmann of University College London, UK, the results are one more clue to understanding water’s enduring puzzle. ‘Water is such a simple molecule, yet we still fail to explain the many anomalies of the liquid state … studies such as this one contribute significantly towards finally understanding this highly unusual liquid.’

Riedo's group now want to investigate whether such viscosity changes occur in other liquids. Sader believes Riedo’s model could be used in ‘a host of applications where lubrication forces at the molecular scale are present’. For example, in two- and three-dimensional printing, the nozzle needs to allow fluid to flow through, but be small enough to print in high resolution. 'This new way of thinking, which is not only considering the fluid viscosity but also the interaction between fluid and surface, could lead to improved design,' says Riedo.