Air trapped in ancient ice has revealed the likely source of the sudden spike in atmospheric methane concentrations that occurred at the end of the last ice age, around 11,600 years ago. According to a team of international scientists, the emissions were largely due to the warming of wetlands in response to rapidly rising temperatures - a finding that holds particular significance in light of present day climate change.

The debate over the sudden increase revolves around two main theories - the wetlands hypothesis and the clathrates hypothesis, which argues that decomposition of marine methane hydrates caused the spike. Finding new evidence for one of these theories was a task of epic proportions, requiring vast quantities of Greenland glacial ice. ’No one’s done this sort of this thing before, mostly because to get enough sample for a carbon-14 measurement in ancient methane, we needed at least 1,000 kilos of ice per sample,’ says lead researcher Vasilii Petrenko of the University of Colorado, US. 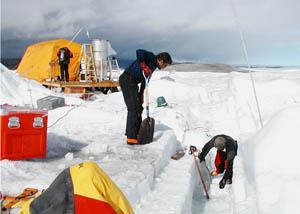 Thousands of kilos of Greenland’s ice was sampled

Petrenko’s team collected and dated tonnes of ice - melting it in a vacuum to ensure it didn’t become contaminated by modern air - to extract tiny amounts of trapped methane. Carbon-14 is all but absent from clathrates, having decayed away over the millenia since the ancient methane hydrates formed, so the researchers knew that levels should decrease in response to warming if these were the main source of the gas. Instead, carbon-14 levels increased over time, pointing to a younger source - wetlands.

’It’s an important confirmation,’ says Eric Wolff, a glacier chemist for the British Antarctic Survey in Cambridge. ’It shows catastrophic destabilisation of hydrates was not so important and should force us to think harder about quantifying the way the wetlands changed to cause the observed methane jump.’

Very large oceanic deposits of methane clathrates exist today. Given methane’s potency as a greenhouse gas, therefore, the stability of clathrates under changing conditions is something of a comfort. But, Petrenko warns, emissions from wetlands would also drive warming. ’There are very large wetland areas in the high latitudes of the northern hemisphere and it’s really the northern wetlands that we could see considerably more methane production from because the Arctic regions are warming faster than the rest of the world,’ he says.

Susan Waldron, who studies biogeochemical cycling at the University of Glasgow, UK, agrees. ’The increase in the study occurred over a very short period of time - 300 years - which is less than the blink of an eye in geological time and is a timescale of real societal relevance in terms of needing to plan, adapt and mitigate for a changing climate.’

Uncertainties remain, however. Petrenko’s team will return to Greenland this summer to look for ’cosmogenic’ carbon-14, which forms under the influence of cosmic rays and interferes with the signal from atmospheric methane. Understanding exactly how the signal should be corrected to account for cosmogenic production would help put the source of the methane spike beyond all doubt.
Hayley Birch