George Whitesides, professor of chemistry at Harvard University, US is to be awarded the 2007 Priestley Medal for a lifetime of achievement in chemistry. 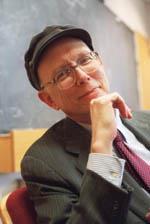 The award, the highest honour bestowed by the American Chemical Society (ACS), recognises a distinguished career spanning over 40 years. In this time Whitesides has generated over 900 papers and more than 50 patents. He is particularly noted for his work in self-assembly of molecules at surfaces which laid the groundwork for advances in nanotechnology. He has also contributed to such diverse fields as nuclear magnetic resonance (NMR) spectroscopy, materials science and microfluidics.

Whitesides has been at Harvard’s chemistry department since 1982, and has served as the Woodford L & Ann A Flowers University professor since 2004. He previously held a faculty position at Massachusetts Institute of Technology after receiving his PhD from the California Institute of Technology in 1964. He will receive the Priestley Medal on 27 March 2007 at the ACS spring national meeting in Chicago.