Why is silver deposition so fast?

Theoreticians claim to have solved the metal deposition enigma

Researchers appear to have solved one of electrochemistry’s more baffling mysteries: why it is that metal ions deposit onto an electrode at an apparently unfeasibly fast rate, when the energetics of the system suggest that it should occur at a snail’s pace, if at all. The finding is potentially significant because such electrochemical interactions are key to economically important phenomena such as corrosion.

In solution, metal ions are surrounded by a solvation shell, which must be shed before the ion can join the electrode. This should require a large amount of energy, slowing the reaction down significantly. Additionally, it has been thought that only metals with high energy d-band orbitals can deposit quickly as these provide a powerful electrochemical interaction between the approaching ion and the electrode. The paradoxically rapid deposition of metals such as silver and copper – in which d-band catalysis of deposition does not play a part – has been termed the metal deposition enigma. 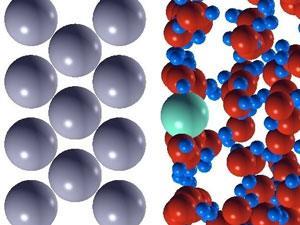 ‘It was thought that the energy of activation needed by the ion to break free from the solvation shell would be very, very high and impossible to overcome,’ says Wolfgang Schmickler of Ulm University in Germany . ‘It would be like trying to climb the Alps on roller skates.’ But by using density functional theory, molecular dynamics simulations and a theory developed by his own group, Schmickler’s team have shown that small univalent metal ions such as Ag+ fit neatly and discretely into the structure of the bulk water. This enables the solvated ion to get much closer to the surface of the electrode than had previously been thought, allowing much greater interaction between the silver on the electrode and the ion in the water.

Secondly the team showed that d-band catalysis of the deposition is not necessary. The approaching Ag ion has a very large 5s orbital, while the metal on the electrode has a large sp orbital. Schmickler says, ‘Essentially, silver simply likes silver. As the ion approaches the surface the overlap of the orbitals is perfect so the electronic interaction is high.’

Alexei Kornyshev, an expert in condensed matter theoretical chemical physics at Imperial College London, says, ‘This is very good work in fundamental electrochemistry that is important for understanding a classical problem in electrochemical science, which has large practical importance.’

The team is now applying the approach to other electrochemical systems with a view to learning more about corrosion at a fundamental atomic level.