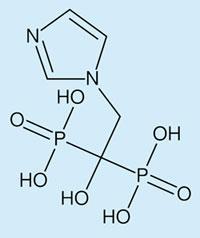 One injection of a new anti-osteoporosis drug a year can stop osteoporotic bone fractures in post-menopausal women, report researchers.

The drug is already marketed by Novartis as Zometa (zoledronic acid) for use in several other disorders, including the genetic bone-softening disorder Paget’s disease, the treatment of bone loss occurring with certain cancers, and the pain associated with bone metastasesduring chemotherapy.

Zoledronic acid is the best of a class of drugs called bisphosphonates at inhibiting the bone reabsorption responsible for frequent fractures. The drugs were first investigated for bone metabolism disorders in the 1960’s, they consist of a central carbon atom attached to two phosphonate groups and two side-chains. The shorter side-chain, usually a hydroxyl group, is called ’the hook’ and is the main reason some bisphosphonates like zoledronic acid, bind so strongly to bone. The other side-chain (for example, the imidazole group on the image above) determines how the drug works.

During bone reabsorption, cells called osteoclasts dissolve the calcium phosphate mineral hydroxylapatite, releasing calcium into the blood stream. Osteoblasts on the other hand lay down bone tissue, both activities normally being held in balance by cytokines and growth factors. Osteoporosis and certain cancers and chemotherapy, however, boost osteoclast activity, resulting in lowered bone density, easy fracture, and hypercalcaemia.

Zoledronic acid sticks powerfully to bone and has the highest efficacy of any bisphosphonate, which is why compared with the shorter times between administration required by other bisphosphonates used in osteoporosis, only one treatment a year is necessary.

’Zoledronic acid’s imidazole group could marginally assist its binding to hydroxylapatite, but it is inhibition of a vital osteoclast enzyme that makes it the best bisphosphonate,’ said Wolfgang Jahnke from Novartis’ Institute for Biomedical Research in Basle, Switzerland.

Bisphosphonates are rapidly absorbed and stored by bone surfaces because of their affinity for bone tissue. There, they are readily ingested by osteoclasts. What happens next depends on how the particular bisphosphonate disrupts their metabolic processes. Without nitrogen atoms in their side-chains, bisphosphonates metabolise to compounds that compete with adenosine triphosphate (ATP), blocking cellular energy processes. This causes osteoclast apoptosis (programmed cell death) and a large reduction in the rate of bone tissue reabsorption.

Nitrogen-containing bisphosphonates have higher bone affinity, but another anti-osteoclast mechanism is possible: interference with the mevalonate pathway that normally leads to cholesterol and certain membrane-bound proteins. By blocking the enzyme farnesyl pyrophosphate synthase (FPPS), nitrogen-containing bisphosphonates disrupt an essential part of the mevalonate pathway called prenylation.

This involves connecting certain small proteins to osteoclasts’ cell membranes via FPPS metabolites. Prenylation inhibition interferes with osteoclast formation, their survival, and the dynamics of their delicate internal cytoskeletons. The latter determines the ruffled shape vital for ensuring that an osteoclast remains in intimate contact with bone surface: interfere with its cytoskeleton and bone reabsorbing ability is severely diminished.

So apart from its bone-sticking power, zoledronic acid inhibits the enzyme FPPS; its 3D structure being a near-perfect fit for the enzyme’s active site. But because the substrate it competes with also cooperates in the inhibition process, FPPS is permanently locked into its inactive form, making zoledronic acid the most effective of the bisphosphonates