Proposed new rules on how elements are named save confusion but sacrifice romance, argues Philip Ball 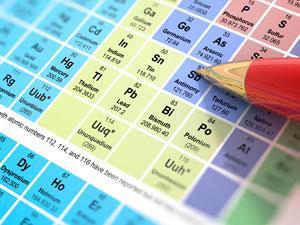 What do you know about the element cassiopeium? You know, symbol Cp? A silvery metal, lanthanide, oxidation state +3? Oh, all right then, maybe you call it lutetium. Whatever.

It’s likely that (teenage idiom aside) conversations like this went on in labs during the first half of the 20th century, when many chemists persisted in calling element 71 the name given to it by the Austrian mineralogist Carl Auer von Welsbach, rather than accepting the priority of French chemist Georges Urbain, who followed the tendencies of his day by christening the element after the Roman name for Paris.

It’s for this reason that the International Union of Pure and Applied Chemistry (Iupac) works to standardise the names of new elements around the world. Now, following its confirmation of the discovery of four new elements (with atomic numbers 113, 115, 117 and 118) it’s time to choose new names that will forever remain a part of the periodic table.

So what can we learn from the chemical name battles of the past?

Like several other lanthanides, lutetium was found as an impurity in the mineral ytterbite (or gadolinite). Given that several analytical chemists were sifting through this trove of rare elements at the start of the century, it’s not really surprising that not only Urbain and von Welsbach but also the British-American chemist Charles James, working in New Hampshire, US, found element 71 in 1907 at much the same time. The question of priority would have been utterly inconsequential if it were not for the fact that the name of the new element hinged on it. Urbain was awarded that priority in 1909, which was why his name  (he spelled it lutecium) was officially adopted. But cultural inertia mixed with nationalism kept von Welsbach’s ‘cassiopeium’ – and later cassiopium – in circulation well after after lutecium lost a ‘c’ and gained a second ‘t’ in 1949.

This was not the last unedifying squabble over the name of a new element. The dispute over element 104, made artificially by nuclear reactions in the 1960s, was particularly bitter. Soviet researchers at the Joint Institute of Nuclear Research in Dubna, USSR, claimed to have detected it in 1964, but such claims for atom-scale quantities of a highly unstable element are often ambiguous. A team at the University of California, Berkeley, US, asserted in 1969 that theirs was the first definitive identification. The Russians wanted to call the element kurchatovium, after the former head of Soviet nuclear research; the Americans wanted the rather more magnanimous historical name rutherfordium.

An Iupac group was convened to adjudicate in 1992, but it wasn’t until 1997 that a resolution was reached and the periodic table gained rutherfordium. As consolation, the Russians got to call element 105 dubnium. Iupac also had to deal with priority disputes over elements 106 and 107, the latter now contested by the element-makers at the Laboratory for Heavy Ion Research in Darmstadt, Germany.

The rules of the game

It is partly with these arguments in mind that Iupac has drafted new provisional recommendations about the naming of elements, which are open for consultation until 29 February and are likely to be applied to the latest four elements set to join the periodic table. These rules remind today’s synthetic-element hunters that, since the first Iupac statement on nomenclature in 1947, discoverers do not have an automatic right to choose a name. They could suggest one, certainly – but acceptance was always conditional on Iupac’s approval. What’s more, the new guidelines state that if a priority claim is successfully challenged after an Iupac name has been assigned, the element can’t be renamed.

The Iupac recommendations stipulate that elements may be named after mythical characters or concepts, minerals, geographical places, element properties (xenon and rubidium, for example) or scientists. There is no mention that a scientist has to be dead to receive this honour – unlike in Iupac’s rather arbitrary 1994 decision,1 which would have done for seaborgium (element 106) had the American Chemical Society not protested so fiercely.

The rules also say a name and symbol only get one shot at immortality. The peculiarity that copernicium (element 112) has the symbol Cn and not the more logical Cp is von Welsbach’s fault: Cp was used for cassiopeium. Similarly, Otto Hahn has lost his chance to enter the periodic hall of fame forever, as dubnium trumped the rival hahnium for element 105.

Beyond these rules, the elements are required to follow precedent with their suffixes: ‘ium’ for metals (groups 1-16), ‘ine’ for group 17, and ‘on’ for group 18. This apparently overrides relativistic effects that might shift the chemical properties to those of another group.

All this seems like sound judgement, and there’s clearly a need for transparent guidelines in an area so prone to controversy. But part of the attraction of the periodic table is surely the capricious patchwork of its older names: the misnomers (oxygen); the absurdly grandiose classicism (praseodymium – the brainchild of that confounded von Welsbach again, would you believe); the bluntly obscure (zinc); and the idiotically parochial (yttrium, ytterbium, terbium, and all the rest). It is nice to see the pantheon of great scientists honoured, but there is something a little clinical, box-ticking and arbitrary about the process; did Copernicus ever actually hold a crucible?

And while the suppression of polyglottism reduces the potential for confusion or chemical disaster, there is some charm and even romance sacrificed when we are not required to navigate our way around kohlenstoff (carbon), wolfram (tungsten) and the splendid stickstoff (nitrogen).

What’s in a name? In chemistry, often a great deal.