The criteria for whether a new chemical element has been discovered are set to change, a provisional report by the International Unions for Pure and Applied Chemistry (Iupac) and Physics (Iupap) has announced.

Although the report states it ‘cannot present a list of criteria for checking … where the number of fulfilled criteria decides on the discovery’, it does suggest the weight to give different physical and chemical techniques when deciding if an element has been discovered. These include excitation functions, mass measurements and cross-reactions (in which the same nucleus is produced via two different combinations of beam and target, and is now extended to also mean if the same nucleus is produced by a decay chain), as well as if the work has been reproduced by a different laboratory or confirmed using different techniques. The additional caveat on cross-reactions settles previous arguments around the discovery of elements 115 and 117, or moscovium and tennessine.

While the new guidance keeps many of the definitions of what counts as a new element – such as an atomic nucleus with a lifetime of at least 10-14s – it does codify the time of discovery as ‘the date of submission of the recorded research work for publication’, stating the date the actual observation was made, or the date of publication, as ‘irrelevant’. ‘Public access to the information is mandatory,’ the authors state.

Since the 1950s, all new elements discovered have been so unstable that they cannot be confirmed through chemical analysis, and so are confirmed through physical tests, such as evidence of radioactive decay or breaking apart. These techniques have led to the discovery of elements up to atomic number 118 or oganesson in 2016. 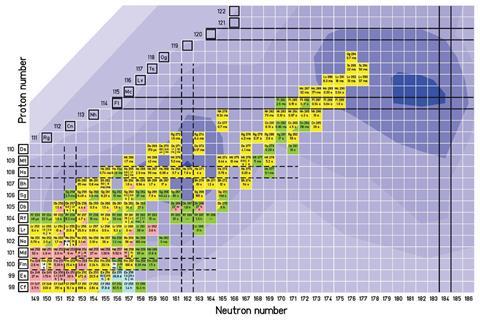 The upper end of the periodic table. For each known isotope the element name, mass number and half-life are given. Colours are attributed to their decay mode: α-decay (yellow), β+- or electron-capture decay (red), β−-decay (blue), spontaneous fission (green) and γ-decaying isomers (white)

The new rules will replace those set down in 1991, which were designed to end the ‘transfermium wars’ – a series of bitter quarrels, predominantly between the US team at the University of California, Berkeley and the USSR team at the Joint Institute for Nuclear Research in Dubna, over who discovered elements 102–106.

The original rules caused almost a decade of controversy over the names of elements 104–106, and were criticised for being written by a group that did not include scientists working in the superheavy element community. The new guidelines are unlikely to fall foul of the same problem, having been prepared by chemists and physicists from Berkeley and Dubna, as well as GSI in Darmstadt, Germany, Riken in Japan and Oak Ridge, US – all centres of element discovery – and Lund University in Sweden, which helped confirm the discovery of moscovium.

The report, which will be out for public consultation until 31 March 2019, follows confirmation earlier this year of the rules on the names of new elements. The new rules mean elements can can only be named after a mythical concept or being; place, area or country; property of the element; or a scientist.