A grand old man of science

William Crookes (1832-1919) and the commercialization of science

William Crookes (1832-1919) and the commercialization of science

Crookes was an outstanding scientist. His chemical achievements include the discovery of thallium; properties of glass and metals; the chemistry of gold mining; and useful though ultimately rather unsuccessful work with the lanthanides. 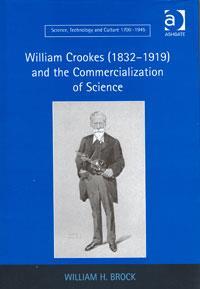 He was a pioneer of radioactivity (his notes in the Science Museum are radioactive and kept in lead-lined storage).

He experimented with light bulbs; invented the exciting, controversial and still purchasable radiometer (’light-mill’); the Crookes vacuum discharge tube - precursor of the cathode ray tube; and his ’spinthariscope’ (an evacuated tube with a ZnS screen scintillating when struck by  a -particles), fundamental for radiophysics. He was an expert on atomic spectra, particularly of the noble gases. He founded and edited scientific journals - best known was Chemical News  which he founded in 1859. A man could not be really happy unless he had just a little more to do each day than he could possibly finish, he said.

The eldest of sixteen children, he left school at 16 for the Royal College of Chemistry (forerunner of Imperial College) and was Hofmann’s assistant there from 1850-54. His lack of a formal university education, commercial use of science and particularly his interest in spiritualism - an area dealt with sensitively here - initially hindered acceptance by his peers, but his outstanding scientific achievements redeemed him, and he became a grand old man of science, laden with honours. His proud motto and heraldic device was Ubi Crux, ibi lux - where the cross is, there is light (mischievously altered at one point by Brock, because of his subject’s spiritualism, to Ubi Crookes ibi Spookes). On the book’s cover is the brilliant Vanity Fair ’Spy  ’ (Leslie Ward) cartoon of Crookes, holding his discharge tube.

The only other biography (1923), by Fournier d’Albe, is far less comprehensive but contains material since lost; Brock has made good use of that book and many other sources. This handsomely produced book is a remarkable achievement and will be the standard Life of Crookes, presenting the extraordinary array of his talents with authority, clarity and gentle humour.