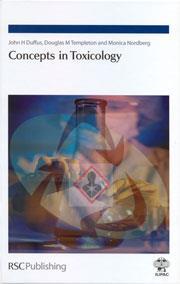 Next time my teenage sons moan that a decision is ’a bit random’ I shall counter, that on the contrary, it was entirely non-stochastic. What am I on about? Well, each population has its own vocabulary and toxicologists are no exception. In the context of that discipline we could all probably distinguish between ’acute’ and ’chronic’ and between ’risk’ and ’hazard’, but what about ’effect’ and ’response’ or ’bioaccessibility’ and ’bioavailability’? These concepts, and a whole host more, are addressed in this slim volume, the objective of which, the authors state, ’is to give full explanations of the meaning and usage of key toxicological terms.’ The requirement for this, the authors argue, arises out of the need to comply with the increasing amount and complexity of chemicals legislation (eg Reach) and the fact that many of the classical tenets of toxicology (eg LD50) have been largely superceded as understanding of the mechanisms of toxicity has developed.

The book comprises four chapters or ’Concept Groups’: Fundamental principles of toxicology; Molecular and
cellular toxicology; Whole organism toxicology; Environmental toxicology. Each concept discussion is prefaced with an Iupac-approved definition. Topics covered range from the classical pharmacokinetic parameters to more recent concepts such as elemental speciation as exemplified by the relative toxicities of Cr(iii) and Cr(vi). In addition, there is discussion of such issues as endocrine disruption, multiple chemical sensitivity and nanoparticle toxicity.

I found this an informative and readable little book. It would be a good primer for those new to regulatory toxicology and provides a valuable update for toxicologists of all persuasions. It will also be of interest to those who require a concise introduction to the subject, although for the complete novice the earlier Fundamental toxicology (J H Duffus and H G J Worth eds; RSC Publishing, 2006) would be more appropriate.