Foundations of organic chemistry: unity and diversity of structures, pathways, and reactions 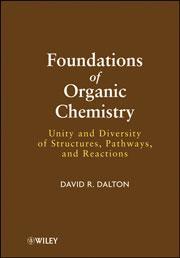 I don’t think there is a genealogical link between the author and Charles Dickens, but while making my way through the first chapters of this almost 1400 page long literary opus, I was convinced that if Charles Dickens had written a book about organic chemistry, he would have written this one!

Still, Foundations of organic chemistry is not a novel but certainly a very unusual chemistry textbook. As the subtitle Unity and diversity of structures, pathways, and reactions indicates, the author attempts to weave all the aspects typically taught in courses on organic chemistry into the overarching theme of natural sciences. A challenging task, but Dalton succeeds without losing his focus.

The well referenced chapters are arranged in three parts, namely Background, Middleground, and Foreground. The Background begins with structure and bonding, followed by an early chapter on spectroscopic methods, and a more traditional section on hydrocarbons. Chapter four includes a section on optical rotatory dispersion and circular

dichroism, and the final chapter of this part finishes off with an introduction to computational methods.

The Middleground deals with organic transformations, while the Foreground discusses fundamentals in biological chemistry but in far greater detail than generally seen in standard textbooks.

The book is not easy to read, and as a non-native speaker I had to consult a dictionary several times. But if you are interested in organic chemistry you have a high chance of discovering links that you haven’t seen earlier. There are many minor errors in this first edition, and I am not convinced by the way the curved arrows are drawn. Nevertheless, this book can be recommended for final year undergraduates, postgraduates and is possibly a useful source for starting lecturers.