Becquerel to the bomb

Uranium wars: the scientific rivalry that created the nuclear age

Uranium wars: the scientific rivalry that created the nuclear age 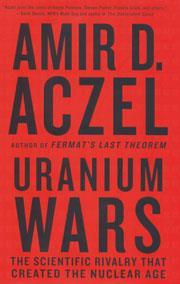 Many detailed accounts are available of the early investigation of the origins of nuclear fission research, especially the Manhattan Project, with its retrospective questions of morality and security.

Amil Aczel, author of many popular science books, has attempted to embrace much of the 20th century story of the science leading to the atomic (fission) bomb. The 18 short, sometimes rather pedestrian, chapters extend from Mendeleev through to the cold war and even contemporary contemplation of further weapons proliferation.

Despite sources being limited largely to biographies, the characters of the chief international scientists are conveyed well, including the scientific and personal difficulties faced by Marie Curie and Lise Meitner.

The contributions during 1939-40 in the UK by Otto Frisch (enemy alien nephew of Meitner) and Rudolf Peierls (but not Kalus Fuchs) at Birmingham are mentioned, although not those of Franz Simon (Oxford) or the cyclotron group under Chadwick in Liverpool. George Thomson’s atomic bomb committee was established in April 1940 (with neither US nor USSR at war).

In September 1941, Winston Churchill asked John Anderson (of the air-raid shelter), originally a chemist, to head the council from which the Tube Alloys project - the British effort to develop a bomb - emerged, despite the national security priority of radar. Only in 1943-44 was much of the research (and 75 scientists) and all production transferred to the US.

For chemists conversant with the pre-second world war history of radioactivity and nuclear science, the last third of the book may hold most interest. Norman Ramsey’s reminiscences about secrecy and compartmentalisation at Los Alamos are explored, as are the efforts of James Franck and Leo Szilard for a demonstration rather than Hiroshima. Recently released decrypted Japanese diplomatic documents reinforce the view that Japan was close to surrender without the atomic attack.

Aczel highlights scientific competition in peace and war, but overall presents a clear but undemanding account of the atomic bomb story.