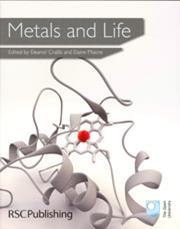 Bioinorganic chemistry is an exciting branch of inorganic chemistry. Rather than being peripheral to biology, inorganic elements and metals in particular control some of the most fundamental of biological processes, such as respiration and transcription.

I was surprised that most of the lanthanides and actinides have been omitted from the periodic table in Fig 1. After all Gd is now being injected into people in gram quantities as a contrast agent for magnetic resonance imaging (MRI), and some isotopes of the actinide elements have promising applications in radiotherapy.

The major classes of biological ligands covered are amino acids, peptides and proteins, and macrocycles (eg porphyrins), with rather little on metal coordination to nucleic acids (DNA and RNA).

There are bullet-pointed questions (with answers) throughout the text. I spotted a few typographical errors (some His residues should be bound to Cu and Zn via Nd in Fig 2.3 and not all via N e  , FeH bond instead of FeO in 3.6, CH instead of CO bond in Fig 4.1, Fe2+ instead of Fe3+ in Table 4.3, one His should be bound via N

in Fig 8.28). The book is very nicely illustrated with clear coloured diagrams, including reaction mechanisms, protein and mineral structures, organelles and organisms, and could become enjoyable reading and make a valuable contribution to undergraduate courses in inorganic chemistry.