The scientific papers of the Honourable Henry Cavendish

The scientific papers of the Honourable Henry Cavendish

Volume 2: The chemical and dynamical papers 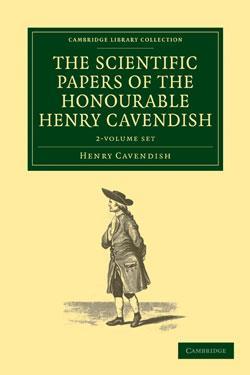 On the evidence of his published discoveries in physics and chemistry, Henry Cavendish (1731-1810) was recognised by contemporaries as the most significant British scientist since Newton. But because he declined to publish any research which he believed to be incomplete or inconclusive, the full extent of his originality remained unknown for decades after his death.

In 1870 another member of the Cavendish family endowed a new physics laboratory at Cambridge. Its first director, James Clerk Maxwell, gained access to Henry Cavendish’s papers and spent several years studying and editing them. One volume - principally concerned with his electrical research - was published shortly before Maxwell’s death in 1879. A revised and augmented edition, with a companion volume including Cavendish’s chemical investigations, appeared in 1921. The 2010 edition is a facsimile of the 1921 volumes, plus a short introduction to this new series of classic scientific reprints and a brief biography of Henry Cavendish.

Cavendish’s important contributions to scientific knowledge are too numerous to list here. (For a brief survey of them, see the article commemorating the 200th anniversary of his death in Chemistry World,  October 2010.) Suffice it to say that these volumes open a window into the private world of a scientific genius, revealing the breadth of his interests and the precision of his laboratory techniques.

How far might Cavendish’s experiments have advanced the progress of chemistry and physics if they had been published before others unknowingly repeated them decades later? We can but wonder.