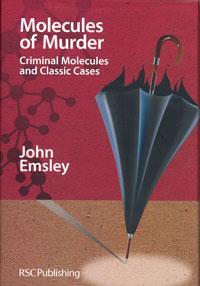 As the preface says, ’the crime of murder by deliberate poisoning has always held a terrible fascination’, and this idea forms the basis of this book. It has been written to have a wide appeal to anyone who is interested in forensic science or, more specifically, forensic chemistry including those whose only knowledge comes from popular TV shows such as Silent Witness  or CSI  . For those with little scientific knowledge there is a very useful glossary at the back which clearly explains any terms used which may be new to the reader. It also contains chemical structures for those who wish to know more about the molecules discussed.

The book is divided into two parts; the first deals with natural chemicals which have played a part in murder cases and the second part deals with man-made chemicals. Each chapter seeks to explain the chemistry of the molecule and then uses real-life cases to highlight its use as a poison. It is well researched and the cases cited span several hundred years rather than focusing solely on recent cases. This provides both an historical and a modern perspective to the choice of poisons.

It is a very well written text book which I think would be of particular interest to students studying chemistry as well as those studying forensic science, although the inclusion of the glossary means that it will also have a broader appeal to fans of forensic science TV shows who may have little or no prior knowledge of chemistry.