The hockey stick illusion: climategate and the corruption of science

The hockey stick illusion: climategate and the corruption of science 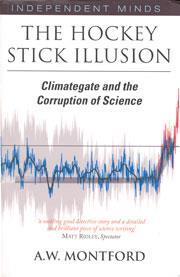 Whether or not historical observations of the Earth system are detailed and robust enough for past and current climate change to be detected is more-or-less beside the point. Our understanding of physics, coupled with our observations of atmospheric composition, tell us mankind must change its behaviour very soon if we wish to limit climate change in the near future.

Unable to dispute the science, and reality, of climate change, climate deniers (or sceptics as they are disingenuously described in this book) have made sustained attempts to discredit climate scientists and the way they work. Here, one small part of the body of evidence that shows the Earth is warming is examined in tedious detail, with a focus on the actions and words of its protagonists. Undoubtedly there have been shortcomings in working practises, many a result of the sustained pressure these individuals have been under from a small but determined group of sceptics (most recently in the UK through the repeated use of freedom of information requests), but this polemic does absolutely nothing to alter the physics of the Earth system. Andrew Montford declares he studied chemistry - with the benefit of his scientific education one would think he should know better. Readers of Chemistry World  will have far better things to do than read this pedantic book.